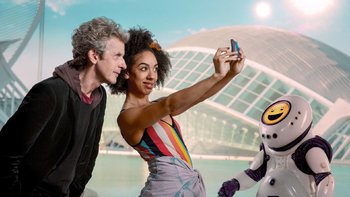 Smile like you mean it. We're not joking.
Click here to see the Radio Times magazine poster for this episode: 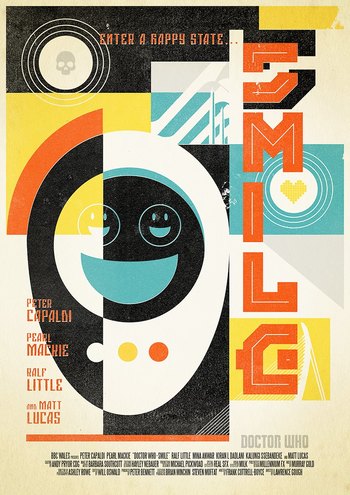 It's time to turn your frowns upside down.
"They're expecting the new garden of Eden. What they are not expecting is to be the fertiliser!"
— The Doctor
Advertisement:

The one with emojis.

Having won the Doctor over, Bill gets to enjoy her first official trip on the TARDIS of her choosing. He gives Bill her pick of the past or future, and Bill decides her interests lie more towards the future. The two land on an upstart human colony... but no humans are to be found. The only notable inhabitants are machines that communicate with ideograms and smileys — simply put, emojis — who give them devices that display their current emotional states. However, there is a dark side to these machines, responsible for the killings of the skeleton crew prior to the duo's arrival, subjecting them to a twisted ironic fate.

As the Doctor and Bill try to uncover what went wrong, they learn the true origins of the fledgling colony and receive a nasty reminder not to take things at face value. The Doctor is hurt by the fact many people were lost and families have been broken, and Bill discovers that the future isn't so neat or pretty after all. However, if they don't learn to grin and bear it, the colony's nanomachines will be murderously cross!

Compare to the Seventh Doctor adventure "The Happiness Patrol" with a similar premise.