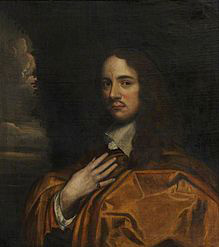 Andrew Marvell (1621-1678) was an English poet, writer, and politician. Born in Yorkshire, the son of a clergyman, he studied at Cambridge University before spending time on the continent, which seems to have put him out of the country when the English Civil War blew up. He made his way home, and joined the Parliamentary side, if only by default when he took jobs as a tutor in the households of various leading Parliamentarians, and then a government job working with John Milton. He eventually also became a Member of Parliament.
Advertisement:

Marvell was not only a politician, but evidently a smart one. When Charles II was restored to the throne, Marvell not only kept his government position — he showed that he had enough clout to petition for the government not to punish Milton for his work for Parliament. As Milton had written against Charles I, and Parliamentarians involved in his execution were suffering his son's savage revenge, it's entirely possible that Marvell literally saved Milton's neck, thereby enabling Paradise Lost to be written.

But Marvell's place in the history of English literature makes him much more than an important footnote. He wrote poetry as a sideline, showing a gift for snappy couplets and appealing symbolism. He also wrote satires and influential political pamphlets. Despite his talent for survival, Marvell was much, much better than an opportunist creep; some of his prose works were attacks on the corruption of the court and the king's taste for power and Catholic sympathies — dangerous enough stuff that they could only appear anonymously until Marvell's death. He seems to have been a genuine patriot and a good representative for his constituency in parliament. He died suddenly in 1678, almost certainly of natural causes, though gossip of the time suggested that, as he had recently satirised the Jesuits, he must have been poisoned by an Evil Jesuit.

Marvell's reputation was somewhat overshadowed for a few centuries by some of his contemporaries such as Milton and John Donne. He was rediscovered in the 20th century, notably by T. S. Eliot, who rated Marvell highly. His most famous poem, "To His Coy Mistress",

is pretty much the Trope Codifier for the more philosophical sort of Seduction Lyric, and contains a bunch of phrases that are hugely quotable, forever appearing in titles and epigraphs; "Had we but world enough and time", "My vegetable love should grow / Vaster than empires and more slow", "But at my back I always hear / Time’s wingèd chariot hurrying near; / And yonder all before us lie / Deserts of vast eternity", "The grave’s a fine and private place, / But none, I think, do there embrace." His pamphlets are also of interest to historians interested in period political thought.