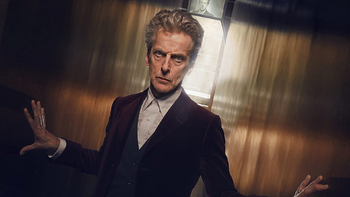 "I’ve finally run out of corridor. There's a life summed up."
Click here to see the Radio Times magazine poster for this episode: "I am the Doctor, I'm coming to find you, and I will never. Ever. Stop."
"There's this emperor, and he asks this shepherd's boy... 'How many seconds in eternity?' And the shepherd's boy says... 'There's this mountain of pure diamond. It takes an hour to climb it, and an hour to go around it. Every hundred years, a little bird comes and sharpens its beak on the diamond mountain. And when the entire mountain is chiseled away, the first second of eternity will have passed.' You must think that's a hell of a long time. Personally, I think that's a hell of a bird."
— The Doctor
Advertisement:

What happens when you push the button that should never be pushed, when you make the Doctor cross the line he should never cross? You get this episode — which we refer to as: The one where Peter Capaldi carries a 55-minute episode nearly by himself and gives a tour de force performance in the process, in the process dying so many times it makes Rory's and even Jack's deaths, put together, look like tripping over a brick. Also known as: The main reason to never, ever, if you have at all valued your existence, piss off the Doctor (unless you're a Dalek, as they're harder to kill than Cockroaches, in which case go right ahead.)

Or if you want to keep things short, you could call this the one where the Doc has an existential crisis.

This, right after Clara just bit the dust. Tonight, it's the Doctor's turn to die. Ad infinitum. And here we thought Steven Moffat couldn't keep killing off characters... and in increasingly heinous ways. Would a therapist be enough? Does the man need a psychiatrist?

Written by Steven Moffat, Part Two of the Series 9 finale of Doctor Who picks up where "Face the Raven" leaves off. It also stands as the show's last Doctor or Companion-lite (in this case the latter) episode to date, as the show moved from airing once every year to once every 18 months or so starting with Series 10, removing the need for Doctor/Companion-lite episodes.

The Doctor watched the one woman he considered the closest thing he had to a soulmate face the raven, and he couldn't do anything to stop it. Now he's been teleported away by unknown enemies to a mysterious castle in the sea. The castle is filled with monitors showing the point-of-view of a mysterious, veiled monster that never stops stalking the Doctor through the castle's halls. The only thing that will stop it — and only temporarily — are the Doctor's confessions, particularly concerning the mysterious Hybrid of Gallifreyan prophecy.

There's an old, cracked portrait of Clara in a bedroom, a dirt-covered shovel near the teleport chamber, and thousands of skulls piled up on the seabed surrounding the castle. There's a paving stone buried in the garden with the message "I Am In 12". The stars aren't in the right positions. And there are many, many rooms, that shift around whenever the Doctor makes a confession.

The Doctor can delay the veiled creature temporarily by luring it to one end of the castle, then running as fast as he can to the other end. This gives him time to do other things, like eat, sleep, and search for room 12. And all the time, he's talking to his mental image of Clara.

He eventually returns to the teleport chamber, and finds a skull, just like the ones on the seabed, and "BIRD" written in the sand. He takes the skull up to the top of the tower, and looks at the stars a bit. As the Veil approaches behind him, he says that the stars are in the positions they'll be in in 7,000 years — but that's not right, because he would know if he had time travelled. He turns and tells the Veil that there is a prophecy, rumors of a Dalek/Time Lord hybrid; he knows the hybrid is real, he knows what the Hybrid is, and he's afraid. The Veil backs off as the castle rearranges itself again.

This time, room 12 is open, and he goes in. Inside is a wall, made of azbantium, a substance harder than diamond. And now the Doctor knows what "BIRD" means, and he's shocked enough that his mental Clara has to snap him out of it. As the Veil approaches, the Doctor punches at the wall a few times, while beginning to tell a story. His hands are bruised and bleeding by the time the Veil catches him and injures him to the point he can't regenerate.

The Doctor crawls back to the top of the tower. It takes him a day and a half. He hooks some wires up to his head, and pulls a lever. The machinery activates, and he falls down and writes "BIRD" in the sand. He disintegrates, and a new Doctor appears in the teleport pod.

Therefore, the Doctor is trapped in a never-ending hell, so how, if at all, will he escape? And what's on the other side of the wall?

"The hybrid destined to conquer Gallifrey and stand in its ruins... is ME."