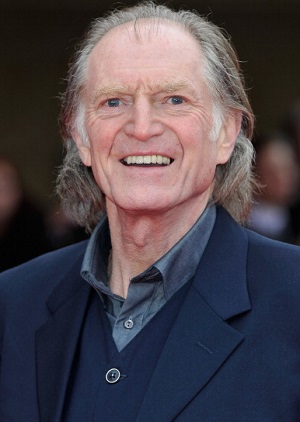 "I get fans stopping me and telling me what a bad man I am. I got a lot of that at Comic-Con. I'd tell them, 'Sorry, mate.'"
Advertisement:

David John Bradley (born 17 April 1942 in York, England) is an English actor and comedian. He is best known for playing Argus Filch in the Harry Potter films and Walder Frey in the HBO series Game of Thrones. Bradley is also an established stage actor with a career that includes a Laurence Olivier Award for his role in a production of King Lear. Other acting credits include The BBC series Our Friends in the North, the ITV series Broadchurch, the FX series The Strain, and the films Hot Fuzz and The World's End. In 2013, he portrayed William Hartnell, the actor who portrayed the First Doctor, in the Doctor Who docudrama An Adventure in Space and Time, and later returned in 2017 to play the First Doctor on the show proper, making him the third actor to take on the role of that specific incarnation, following the deaths of Hartnell and Richard Hurndall (funnily enough, he'd also played an especially nasty villain on the show before either of these). He's also portrayed the character in Big Finish Doctor Who.

If I hear any more language like that from you, young lady, you're in for a jolly good smacked bottom!