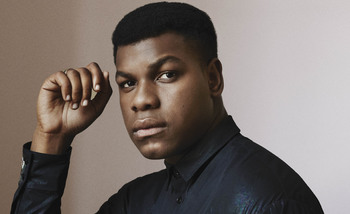 "I'd like to be in anything that tells a good story and has an interesting character."
Advertisement:

He's best known for playing Finn in the Star Wars sequel trilogy, starting with The Force Awakens. Before that, Boyega gained prominence for his performance as the lead Moses in the 2011 sci-fi comedy Attack the Block.

In addition to starring in Pacific Rim: Uprising, he also served as a co-producer.

Earned acclaim and several accolades for his performance as Leroy Logan in the anthology series Small Axe.