Film / The Colour of Magic 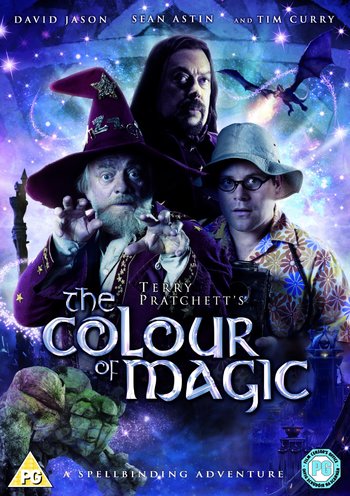 The second Discworld adaption by Sky One, The Colour of Magic adapts the Discworld novel of the same name, as well as the immediate follow-up The Light Fantastic.

In the fantastical Discworld's resident Wretched Hive, Ankh-Morpork, the Disc's first tourist, the naive Twoflower, finds himself the target of much attention and confusion on arrival. Soon hooking up with cowardly "wizzard" Rincewind, the two embark on a comedy of errors which leads them on one adventure after another (such as introducing the concept of insurance to a greedy public, falling afoul of the upwardly mobile Trymon of Unseen University, encountering imaginary dragons and octogenarian barbarians, and accidentally saving the world), merrily skewering fantasy cliches along the way.

The movie focuses more on Unseen University in The Colour of Magic part than the original book, as well as having Vetinari's character more resemble his later interpretations.