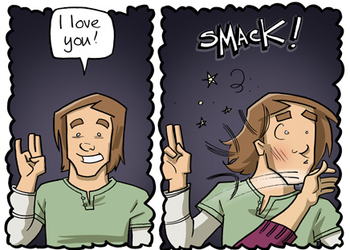 ◊ is the correct gesture.
Janeway: I may never put my hands on my hips again.
Neelix: You had no way of knowing you were making one of the worst insults possible.
— Star Trek: Voyager ("Macrocosm")
Advertisement:

A character goes to make a perfectly polite, helpful gesture, or perhaps simply a cool one, and ends up making a rather unfortunate rude or shocking one instead. Maybe someone punching the air or pointing keeps their hand open while doing it, resulting in the Nazi salute, or someone using the peace sign ends up swearing at the people behind them. (This one only applies to British characters, or oblivious foreign ones.) Alternatively, a clap on the back may be taken as a genuine attack, resulting in the well-meaning character getting clobbered.

Bonus points if this results in a Not What It Looks Like moment. For Western viewers, the Bicep-Polishing Gesture is likely to be this. For Brits, the V-Sign has this effectnote but only if the palm is inwards; Ringo Starr is always doing the palm-out version and is never misinterpreted for it. Compare Nonverbal Miscommunication and Crazy Cultural Comparison. See also Cross-Cultural Kerfluffle.