Film / Me and Earl and the Dying Girl 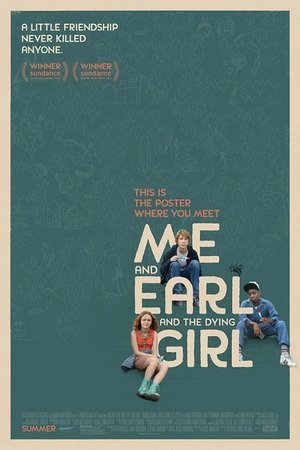 The other teenage cancer movie.
"It was the best of times, it was the worst of times."
— The opening line Greg decides not to go with
Advertisement:

Me and Earl and the Dying Girl is a 2012 novel written by Jesse Andrews. It received a 2015 film adaptation directed by Alonso Gómez-Rejón.

Greg Gaines is a self-loathing and introverted high school senior who makes low-budget parodies of classic films with his friend (whom he refers to as his "co-worker") Earl. When Rachel Kushner—a girl at his school whom he hasn't talked to in years—is diagnosed with leukemia, Greg's mother forces him to spend time with her. Although their hangouts are awkward at first, it inevitably turns into a real friendship. As Rachel's health worsens, Greg and Earl are coaxed by their expecting school to make Rachel one of their no-budget parodies that she's come to enjoy so much.

After its premiere at the Sundance Film Festival in January 2015, Fox Searchlight acquired it for $12 million, making it the biggest buy in Sundance history. Although released around the same time as a certain other movie involving teenagers with cancer, Me and Earl and the Dying Girl carries a more flexible yet still snide tone, and its captivating lead trio primarily focuses on the friendship aspect of their relationship.

Me and Earl and the Dying Girl provides examples of:

open/close all folders
The Movie
The Book
Both

Alternative Title(s): Me And Earl And The Dying Girl