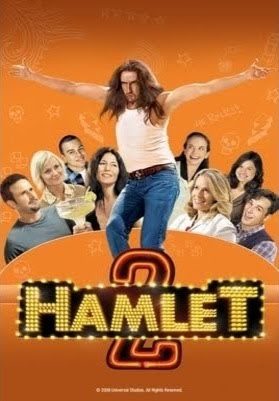 The 2008 comedy film Hamlet 2 stars Steve Coogan as high school drama teacher Dana Marschz, a recovering alcoholic and failed actor who has earned a reputation for his poor adaptations of famous films (rather than his ability to teach anyone anything). At the start of the most recent semester, Dana learns two sobering facts: the school has cut its budget to the point where his drama program remains the only arts class left in the curriculum, and his class will end up cut at the end of the semester.

Marschz — now despondent over both the impending loss of his career and numerous other personal issues — decides to go all out for his last big production in an attempt to save the program. He writes a "sequel" to the play Hamlet in the depths of his desperation; the "sequel" mixes time travel, Jesus Christ (played by Marschz himself), and the showstopping musical number "Rock Me Sexy Jesus" into the family drama of The Bard's famous play. When the school's administration realizes Marschz plans to put on the controversial play at the school, they order him to stop production.

While Marschz's students rally behind him and make plans to put the play on elsewhere, the school's cancellation of his play catches the attention of civil liberties lawyer Cricket Feldstein (Amy Poehler), who turns the issue into a fight for free speech (and makes the play a national story in the process). Her work in protecting Dana's rights soon attracts the attention of numerous other groups, all of whom plan to protest Marschz's one last chance at greatness.