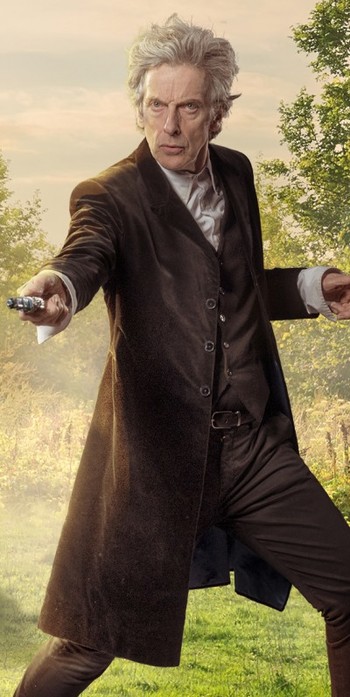 "Sometimes the only choices you have are bad ones, but you still have to choose."
First appearance: "The Day of the Doctor" (2013)note Cameo before his official first appearance in "The Time of the Doctor"
Debut: "Deep Breath" (2014)
Regeneration Story: "Twice Upon A Time" (2017)
Played by: Peter Capaldi (2013–2017)
Voiced by: Peter Capaldi (2014–2015); Jacob Dudman (2020); Jonathon Carley (2020)
"Winning? Is that what you think it's about? I'm not trying to win. I'm not doing this because I want to beat someone, or 'cause I hate someone, or because— because I wanna blame someone! It's not because it's fun. God knows it's not because it's easy. It's not even because it works, because it hardly ever does. I do what I do because it's right! Because it's decent! And above all, it's kind! It's just that. Just kind."
Advertisement:

The first incarnation in the Doctor's second regeneration cycle.

An acerbic, aging punk rocker-cum-street magician. Although still lovably dorky, he is less goofy compared to the Eleventh Doctor and values a pragmatic approach. Twelve exploits the full breadth of his age and experience as a Time Lord rather than hiding from it, and can be dangerous and difficult as a result. Because he is a bit blunt and insensitive at times, he occasionally outdoes his predecessor's alien mannerisms. Unlike some past incarnations, he Hates Being Touched and has little interest in flirting with anyone; even a simple hug makes him squeamish at first. Despite all of this, he remains a Hurting Hero capable of incredible compassion towards even the least likely souls, still determined to be the man who saves people - Earth, as he often warns enemies, is definitely under his protection and, if you hurt it (or things he cares about), he's coming for you. And God help you when he does. A mix of his Third and Fourth incarnations, he could both kill you and, on the occasions he chooses not to kill you, he'll make you wish he had.

This Doctor sees rich Character Development over the course of his adventures and overtime is shown to be capable of a deep love of many kinds; you can, in fact, tell where he is in his character development - just look at how his hair grows! For his first companion Clara Oswald, he endured 4 1/2 billion years worth of torture for her, and afterwards he risked space, time, and his whole identity to save her from the grave... and he almost succeeded. He was the Doctor who truly returned the love of his most infamous wife, River Song, and had the growth to move on from her death. He met Nardole, rescued him from life as a head on a robot, and facilitated his reconstruction with various body parts all because he needed someone to keep him company- though Nardole quickly grew annoyed with the Doctor's attitude. With Bill Potts, a teacher-pupil relationship grew into familial love reciprocated in its own ways. Finally, his relationship with his Arch-Enemy The Master — regenerated into a woman, Missy, since he last saw them — and their mutual longing for the friendship they once knew is the story that weaves throughout all of his adventures...

...save his very last, "Twice Upon a Time". The final acts of the Doctor who learns and knows more than any other the values of kindness and love are to 1) inspire his first incarnation to regenerate despite all the terrors that lie ahead and 2) to let go of his present self and allow Thirteen to exist.

It is a tribute to the longevity of this show that, in 1974, a 15-year-old Peter Capaldi wrote a letter to the Radio Times praising Doctor Who's tenth anniversary serial. His very first appearance as the Doctor (as opposed to his first story) is in the climax of "The Day of the Doctor", the 50th anniversary special.

Tropes associated with Doctor Who Adventures

In 2017, Big Finish announced they will be bringing the Twelfth Doctor into their Doctor Chronicles audio series in February 2020, with Doctor impressionist, Jake Dudman, playing the role while also narrating.