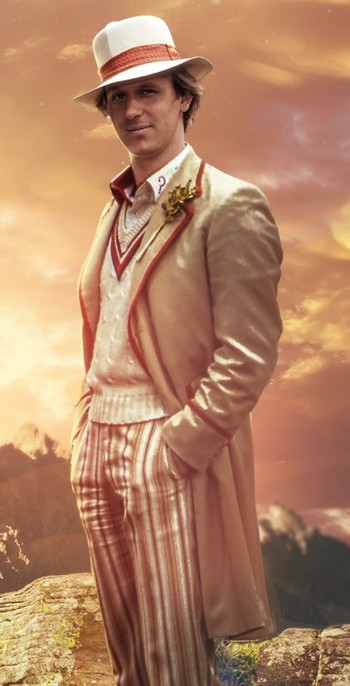 The put-upon Edwardian cricketer. Blessed with a "pleasant open face", the Fifth Doctor lived his life according to the British tradition of fair play. A borderline Glurge Addict, determined to make the best of bad situations, his episodes gained the air of a field trip gone horrifically wrong. Ironically enough for this gentle and pacifist Doctor, his stories tended to have high body counts.

This Doctor behaved a bit like an older brother towards his companions — or perhaps an exasperated Team Dad whenever things would inevitably go haywire. At the same time, he also had stronger shades of an Absent-Minded Professor than usual; being highly curious and eager to learn and explore, but also prone to being easily distracted or getting caught up in his own thoughts and musings, sometimes to the point where he got himself and others into trouble simply by not paying enough attention. While the Doctor was no stranger to running afoul of local authorities — either due to misunderstandings or the local authorities being of the oppressive type — and getting arrested and imprisoned as a result, it happened so often to Five that it became something of a Running Gag for his era, which the Extended Universe would later lampshade mercilessly.

His era was notable for Doctor Who becoming more of an ensemble show, with up to three companions travelling with him at once. It was also during Five's tenure that the Sonic Screwdriver was destroyed by one of his foes (John Nathan-Turner felt that the show's writers would too often fall back on it as a Deus ex Machina), making the Doctor a more "hands free" character, something that would last until the TV Movie revealed that the Seventh Doctor had built a new one at some point.

After a trip to Androzani Minor resulted in he and his newest companion Peri touching unrefined spectrox, they developed spectrox toxaemia and had to seek a cure before the poison killed them. They were caught in the middle of a cabal of greed, murder, lust, and the worst luck ever. Fortunately, the Doctor learnt the sickness could be cured, but only managed to save Peri when his body lost the strength to stand and he lost half of the antidote in the dirt. Shortly after that, the Fifth Doctor underwent a very delirious regeneration.

Though young when he was first cast (29, the youngest Doctor ever until Matt Smith), Davison was already a well-known actor, having played in All Creatures Great And Small. He was the first classic Doctor to show up in the new series. His eventual son-in-law David Tennant cited him as his inspiration for playing the Doctor. 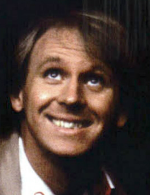 Voiced by: Peter Davison (1999–present)
Soldier: You are under arrest.
Fifth Doctor: Am I? What a surprise! Honestly, what was that? 30 seconds? Well, at least I've got it over with.
The Edwardian cricketer; vulnerable and highly noble. As in the original show, he's a friendly — though rather testy — guy who's willing to give anyone a chance. Big Finish tends to also show a darker and more bitter side of his personality at times, and fully explores his change in attitude after "Earthshock".
"I might regenerate. I don't know. Feels different this time..."