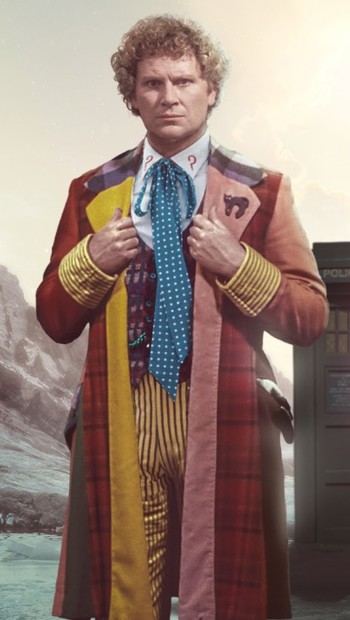 "Planets come and go. Stars perish. Matter disperses, coalesces, forms into other patterns, other worlds. Nothing can be eternal."
First appearence: "The Caves of Androzani" (1984)
Debut: "The Twin Dilemma" (1984)
Final story:note Colin Baker was dismissed from the role in 1986, and declined to return afterwards. "The Trial of a Time Lord: The Ultimate Foe" (1986)
Regeneration television story: "Time and the Rani"note Regenerates in the pre-title sequence. Baker had declined to do the regeneration, resulting in the Doctor's face being obscured during the process. (1987)
Regeneration audio story: "The Sixth Doctor: The Last Adventure – The Brink of Death"note Leads directly into "Time and the Rani". (2015)
Played by: Colin Baker (1984–86, 1989, 1993); Sylvester McCoynote Played the Doctor during his regeneration into the Seventh Doctor (1987)
Advertisement:
Voiced by: Colin Baker (1985, 1997); Angus Villiers-Stuart (2020)
"In all my travelling throughout the universe, I have battled against evil, against power-mad conspirators. I should have stayed here. The oldest civilisation: decadent, degenerate, and rotten to the core. Power-mad conspirators, Daleks, Sontarans, Cybermen — they're still in the nursery compared to us. Ten million years of absolute power. That's what it takes to be really corrupt."

The prideful, articulate naysayer with a Hidden Heart of Gold and the dress sense of a BBC test card. The Sixth Doctor was a darker and certainly more unstable Doctor, more suited for a hard and chaotic universe, whose default emotions were righteous indignation or smug self-satisfaction. He wore a multicoloured coat (which to this day is quite possibly the most visually distinctive outfit the Doctor has worn, for better or for worse - perhaps it was a midlife crisis?) and wasn't averse to fisticuffs or murder to get out of a desperate fix.

Despite his thunderous exterior and tendency towards Dirty Business, he still remained firmly dedicated to the pursuit of justice, and was always capable of being deadly serious or emphatic to others' plight when the situation called for it, and when the chips were down, he always remained unwavering and uncompromising when confronting the local forces of evil or the morally misguided, unafraid to give them a sharp and passionate "The Reason You Suck" Speech or Kirk Summation, no matter how great a threat they posed to him; occasionally, he'd dare them to actually go through with shooting him while unleashing a dictionary of Sesquipedalian Loquaciousness at them.

Alas, viewers weren't exactly fond of the idea of an overtly morally grey Doctor, especially when his first story featured him strangling the living daylights out of his companion unprovoked. During his first season, the show got in trouble for being too violent, and after a double-length hiatus and an even rockier second season, Baker became the only actor to be outright fired from the role, thanks to Executive Meddling. The fallout was so acrimonious that he didn't reprise the role for a regeneration (he asked for a full season, but the BBC wouldn't budge past a single story, arguing that the 18-month hiatus somehow contractually counted as a season), so they Dropped a Bridge on Him. However, Colin Baker is actually a wonderful guy and has always been an ardent fan of the show even after the hell he went through while playing the Doctor; he is currently still redeeming the character fantastically in Big Finish Doctor Who, to the point of being voted "favourite audio Doctor" by the fans, and eventually did his Doctor justice with a proper regeneration story in 2015.

As the years went by, the Sixth Doctor had many companions, who helped sand down the prickly attitude and the ego to match. He stood atop his soapbox only when he needed it and boasted when it was appropriate.

However, while he was becoming a better person, he encountered his antithesis, the Valeyard, who tried many times to seize everything the Doctor had for himself, until a day came when one of his overarching plans succeeded. Six, trapped in the Matrix with no escape and the company of a triumphant Valeyard, decided to cut his own life short and steer his younger self toward Lakertya, despite a warning that something was producing deadly radiation nearby. His TARDIS came under attack by the Rani as she pelted it with beams from a radiation gun, which didn't hurt humans but was lethal to Time Lords. Six got a glimpse of his next self as he regenerated, and the version of him in the Matrix faded away, leaving the Valeyard robbed of victory and trapped inside.

The Sixth Doctor's first comic stories were written before his first televised episode, and with no characterisation to go on, the writers interpreted him as a much kinder incarnation than the Jerk with a Heart of Gold we all know and love from the TV show. It stuck, and his adventures with Frobisher and Peri show him as a kind, determined intergalactic hero.
Book Tropes 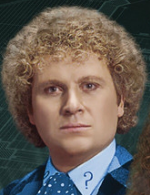 "Am I not permitted an occasional moment of melodrama?"
Voiced by: Colin Baker (1999–present); Terry Molloy (2012); Nicola Bryant (2014)
"I intend to rise above your barbs... but before I do I'd like to say that this coat can only be appreciated by someone with a sharpened aesthetic sense — not a dunderhead like you!"

(In)famous for being a darker and grittier Doctor, Six is allowed to grow as a character in Big Finish and expand beyond his unstable origins of the TV show. He's still an insufferable know-it-all with a fondness for creative insults and poor fashion sense, but with plenty of Lampshading and alternative clothing this time around, and his travels sees him gradually mellow out him a bit. His new adventures notably show a kindness and depth that often was not there in the series.

The Doctor of War

In an Alternate Universe, the Fourth Doctor destroyed Skaro in Genesis of the Daleks which leads to the Time War starting much earlier and the Sixth Doctor becoming known as the Warrior.

"I've had good innings. All those lives I have lived... I hope the footprint I leave will be... light, but apposite..."