K9 Mark ISpelling Both "K9" and "K-9" have seen use in licensed media, but John Leeson has always been credited as "K9" or "Voice of K9". (Fourth and Tenth Doctor) 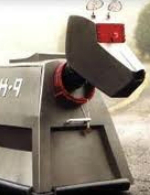 The first robot-buddy of the franchise, hailing from the 51st century. K-9 Mark I, the original built by Professor Marius, was a highly advanced robot built to resemble a dog. Known for his laser nose, propensity to speak in Literal-Minded terms, and his constant uttering of "Affirmative", or "Negative", which stuck with his descendants. He had a short run and remained with Leela on Gallifrey. This was because his prop's maintenance sucked. Prone to break even if it hit a simple bump on the floor, he was quickly replaced by Mark II. Mark I was later brought back in his own series but due to design copyrights, he got destroyed in a fight with the Jixen and regenerated through a special repair unit into a brand new appearance with Laser-Guided Amnesia to sever all explicit ties with the Doctor Who franchise.

K-9 Mark II was the replacement for Mark I, who would now only stun, not kill things (at least not living things - he does kill at least one robot). Affectionately referring to the Doctor as "Master", Mark II was conceived because K-9 was popular with the kids, but the prop needed a redesign after breaking down all the time. He stayed with Romana II when she stopped travelling in the TARDIS. John Leeson quit the role at the end of Season 16, so David Brierley was brought in for Season 17 as his interim voice actor. The change in his voice was Hand Waved as K-9 contracting robot laryngitis. Brierly quit after on season and Leeson returned for Season 18, on the understanding that K9 would be written out during the season.

K-9 travels with the Doctor, and Romana, but has on occasion been relegated to looking after the TARDIS while his Time Lord friends go out exploring. He eventually joins back up with Leela and Romana in the Big Finish spinoff Gallifrey. On one occasion, both K-9 and Romana, after establishing themselves on Gallifrey, rejoin with the Doctor for a once-off adventure involving Professor Chronotis.

K-9 Mark III was the model who got given to Sarah Jane Smith as a gift from the Doctor, in the One-Episode Wonder K-9 and Company. He turned up in a few comic stories and "The Five Doctors", and that was it (unless you count the non-canon "Search Out Space" and "Dimensions in Time"). He didn't appear again until 2006 in a few audio stories leading up to Sarah Jane Smith's return to the series proper, where he got badly damaged, fell into disrepair, and rusted in Sarah Jane's attic because she didn't know how to fix a robot dog with futuristic technology, nor could she reveal said technology to anyone before its time. Mark III's functionality was somewhat restored by the Tenth Doctor, long enough for him to give his life by defeating the Krillitanes.

K-9 Mark IV was given to Sarah Jane by the Tenth Doctor as a replacement for Mark III, along with a sonic lipstick inside his casing. Mark IV was better associated as Sarah Jane's K-9 than the Doctor's, and this loyal robot called her "Mistress". He sported a more computerized-sounding voice and did not have as many locomotion woes because he could hover up stairs. He served as Sarah Jane's loyal pet and had an ongoing rivalry with Mr. Smith, the Xylok supercomputer. However, licensing issues left him trying to close a black hole after a Switzerland experiment went awry for the first three seasons of the The Sarah Jane Adventures. Then, he had a more active role in the plot, until the Australian K-9 series came out and the licensing disputes resurfaced, causing him to go to college with Luke Smith and return to light roles in the show.