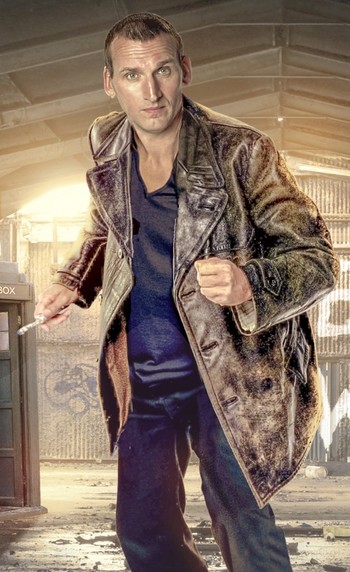 "I'm a Time Lord. I'm the last of the Time Lords. They're all gone. I'm the only survivor. I'm left travelling on my own, 'cos there's no one else."
First appearance: "Rose" (2005)
Regeneration story: "The Parting of the Ways" (2005)
Played by: Christopher Eccleston (2005)
Voiced by: Pete Walsh (2020)
"Do you know like we were sayin'? About the Earth revolving? It's like when you're a kid. The first time they tell you that the world's turning and you just can't quite believe it 'cos everything looks like it's standin' still. I can feel it. The turn of the Earth. The ground beneath our feet is spinnin' at 1,000 miles an hour and the entire planet is hurtling around the sun at 67,000 miles an hour, and I can feel it. We're fallin' through space, you and me, clinging to the skin of this tiny little world, and if we let go... That's who I am."
Advertisement:

The brooding, but very sassy veteran. Riddled with Survivor Guilt from his memories of the Time War, the Ninth Doctor was dark, cynical, and moody at times, and his eagerness to take on "tourists" was diminished. His short temper made it harder to relate to people, and he reacted like a scorched cat whenever they let him down, yet all of it masked great affection and empathy for others, and that he was a (reluctant) optimist at his core. Prone to mood swings, switching between a clown and Jerkass within the breadth of the same conversation. Most normally dressed Doctor, with close-cropped hair, a wristwatch, Timberlands, and beat-up leather jacket. A much more street-smart Doctor than previous versions, even outright stating that he doesn't "do domestic". Made a Heroic Sacrifice the Fifth would be proud of and was generally fantastic.

In terms of television, Nine has had the shortest regular tenure out of all the Doctors, with just 13 episodes broadcast in a single season. The only others shorter than his are the Eighth Doctor's two onscreen appearances, and the War Doctor's three, the latter of which (plus Eight's second) were all contained within the Eleventh Doctor's era. Counting Paul McGann and John Hurt's work as the Doctor for Big Finish, Eccleston officially becomes the shortest-tenured actor in the role, dropping behind John Hurt's combined fifteen episodes. It is also probable that in the Doctor's own timeline, the Ninth is also chronologically the shortest lived in terms of time spent between regenerations. The fast, almost realtime pace of the Ninth Doctor's only season and the constant presence of companions left very little room for extended off-screen activities between episodes. Word of God has stated that at the beginning of the series, the Ninth was still fairly new (to stress that he wasn't the one who fought in the Time War), especially since he was just finding out what he looked like.note Along with the Seventh Doctor who had the show cancelled on him, The Eighth Doctor has a long tenure of Expanded Universe adventures after his sole televised appearance. And the War Doctor originally looked like the young John Hurt, indicating a very long career. Previous Doctors tenures also had varied room for off-screen adventures in other media making their lifespans certainly much longer than their realtime television tenures. These windows of opportunity often happen between two consecutive episodes where one companion leaves and another joins. Also, the Ninth is the least touched upon Doctor in expanded media for a long time, though luckily Titan Comics and Big Finish are breathing new life into the Ninth Doctor's adventures.

In a surprise announcement in 2020, Big Finish revealed that they managed to get Eccleston to reprise the role. So far, Eccleston has been confirmed to have signed on for twelve audio stories, of which the first batch is scheduled for release in May 2021. Eccleston was later confirmed to appear in a further four boxsets, releasing in 2022 and 2023.

Tropes associated with the Target novelisations

In cooperation with licence holders AudioGo, Big Finish made Nine the central character of the Destiny of the Doctor story "Night of the Whisper". In 2017, Big Finish revisited the Ninth Doctor era with The Ninth Doctor Chronicles.

that Eccleston would be returning to his role as the Ninth Doctor in an audio series for Big Finish, after a fifteen year absence from playing the character.

"Rose, before I go, I just want to tell you, you were fantastic. Absolutely fantastic. And do you know what? So was I."