Recap / Doctor Who Missing Adventures 20 The English Way Of Death 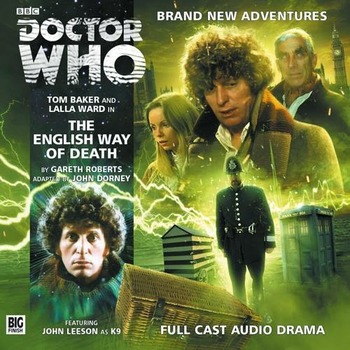 The Fourth Doctor, Romana II and K-9 land in London, post World War I, so that the Doctor can return some library books. All is well, K-9 ensures that this location and time period has historically got no alien invasions or other spooky-going-ons to delay the Doctor, so naturally, guess what happens? Zombies begin invading England, while their leader, an evil cloud, plans to destroy the Earth to abuse his evil power of turning dead people into zombies.

It was released in 1996 by author (and future episode writer) Gareth Roberts, and with his blessing, was adapted into a full-cast Big Finish Doctor Who audio drama starring Tom Baker, Lalla Ward & John Leeson in 2015. It can be purchased here

. The book was re-released in 2015, less than two months after the audio was released.

The audio contains examples of: