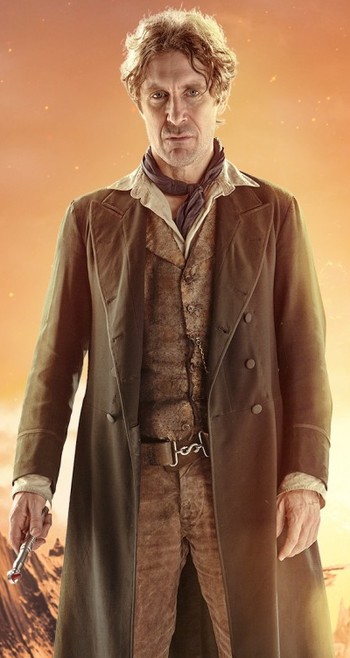 The bouncy, charming, optimistic romantic, slowly darkened by the Last Great Time War into a rugged Warrior Poet from loss and sorrow. A man who wanted the universe to be peaceful and beautiful, only to be met with disaster and doom that ruined his expectations. From the little we saw of him, the Eighth Doctor was a chatty, passionate figure who revelled in life and living and — uniquely among the Doctors — seemed to enjoy giving people hints about their futures.

Notably, he was the Doctor who shattered the No Hugging, No Kissing policy forever, happily snogging his companions just because he wanted to. He also claimed to be half-human, which was either ignored or denied by fans and in later stories. Alas, TV audiences only knew him for a single night, owing to neither BBC nor Fox being interested in turning the TV movie into a full revival of the series despite it doing quite well in the franchise's native UK (Fox lost interest because the film flopped in America — for whom it was directed — though for whatever reason its British success didn't faze the BBC).

He got fleshed out considerably in the Expanded Universe media, including the Eighth Doctor Adventures novels, the Doctor Who Magazine comics and the Big Finish audio series, and continues to be, before finally coming Back for the Dead in the TV series for a prelude to the 50th anniversary special. Despite his scant three appearances on screen, he has one of the, if not the biggest resume of stories out of all the Doctors, when books, comics and audio adventures are factored in.

In contrast to the somewhat clownish, yet manipulative and secretive Seventh Doctor, Eight was defined by his kind, optimistic and classy personality, and he took on many companions. Unfortunately, he was subjected to some of the meanest and nastiest circumstances, constantly captured and tortured, witness to many senseless deaths, and saddled with amnesia so many times that it is a wonder he didn't go insane.

In the later years of his life, he had turned colder and angrier and less willing to take on companions because it was becoming clear that something terrible in the universe had been brewing. Finally, the Daleks and Time Lords were locked into a terrible and enormous war, which the Doctor tried to avoid like the plague. However, he was often forced into involvement, but tried to keep his distance from the centre of the battle. When he offered safety to a gunship crewmember in an act of goodwill and got rebuked, Eight went down with the ship and awoke to the unavoidable truth that he must enter the Time War or the universe would soon be gone. Caving to despair and rage, he allowed himself to become a warrior and gave up on being the Doctor.

Tropes associated with the TV movie

Five months after the telemovie aired in America, Doctor Who Magazine made the Eighth Doctor the star of their comic strips, where he faced significant character development. 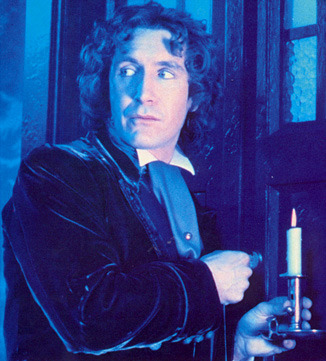 The Doctor didn't even slow down. One part of his brain started madly calculating velocities and trajectories. Another part started advising him strongly against this course of action. Another part was sticking its arms out and making aeroplane noises.
The Doctor leapt from the pier. There was a moment, almost a silent moment, when he was sailing free through the air, unconnected to anything.
Then he was vaulting easily over the railing of the ship, landing smoothly on his toes on the other side. The tourists on board the boat burst into a round of applause. The Doctor broke into a smile, and gave a little bow, letting them take photos.
— Unnatural History

The one, the not-so-only. The Doctor received a lot of Character Development throughout the EDAs novels, making him a much more complicated person than he was in the TVM.

Tropes associated with Doctor Who and the Time War 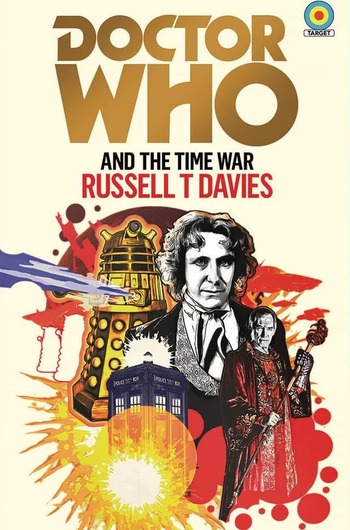 Tropes associated with other prose stories

"I may talk like a fool, but I always know what I'm talking like a fool about!"
Voiced by: Paul McGann (2001–present); India Fisher (2010)
"Sorry, I was soliloquising again. Filthy habit."

Bouncy, chatty and very fond of humans, the Eighth Doctor was fleshed out considerably in Big Finish audio stories and quickly became the series' Breakout Character. After the new TV series stated that the Doctor would end up committing double genocide in the Last Great Time War, Big Finish started slowly but steadily breaking him. Eventually he would stop being in the monthly audios, and he would get his own separate series - "The "New Eighth Doctor Adventures" which takes place at a later time in the same continuity and its sequel series Dark Eyes, Doom Coalition, and Ravenous sees him eventually outgrowing his Victorian look. In the waning days of his life, the Time War erupts, leading to The Time War stories. He begins looking dishevelled, mixed between both Victorian and battle-ready clothes.

"The Night of the Doctor" Tropes

Tropes associated with "The Night of the Doctor"

"Four minutes?! That's ages! What if I get bored, need some books, a television? Anyone for chess? Bring me knitting!"

Along the way to his return to the show, Eight really went through the wringer. The happy, cheerful days he had enjoyed were a distant memory, as he was subjected to an unfairly tortured existence as the violence and loss across the universe rapidly grew until it kindled into the Last Great Time War. We are presented with a hurting poet who is about one step away from total collapse as he finds himself powerless to do anything to the effect of being the Doctor, and then it gets thrown in his face so hard that the Doctor feels like his existence has become futile and lets go of his identity in a final moment of pure misery.