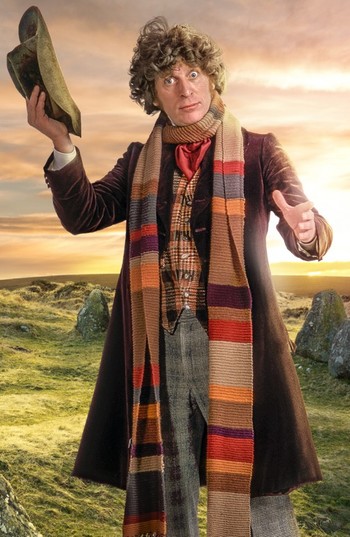 The idiot abroad, an aggravating cross between Sherlock Holmes and The Mad Hatter. Somewhat crazy-eyed, famous for a stupidly-long scarf, and very alien. In reaction to his long exile as the Third Doctor, the Fourth Doctor is defined by his strong wanderlust and a deep-seated resentment toward authority figures— particularly UNIT and his fellow Time Lords. Naturally, this resulted in Four's leash being yanked by every authority figure in the known universe, including the show's embodiment of God; the White Guardian.

Highly eccentric, the Fourth Doctor delighted in keeping both friends and foes alike off-guard with oddball comments (including the occasional Stealth Insult) and pranks. But despite his generally goofy and cheeky attitude, he would occasionally have moments of intense brooding and seriousness, and could even be outright callous and intimidating at times (the result of Tom Baker, dealing with then-undiagnosed bipolar disorder, injecting himself into the character) — frequently emphasizing and affirming his distance from humanity. Nevertheless, he still displayed a strong moral code when the chips were down; firmly believing that the end never justified the means. His most famous quirks were offering people jellybabies and doing tricks with a yo-yo whenever he needed to relax or think (or test the gravity of a new planet).

The longest-serving Doctor to date in real-world time, both by years and season count (seven each), and probably the best known of all his incarnations. If you don't know who Tom Baker is, close your eyes and think of Doctor Who. That's him. (or possibly David Tennant for newer fans — see the Tenth Doctor page.)

Tropes associated with the TV Comics

Tropes associated with the Doctor Who Magazine line 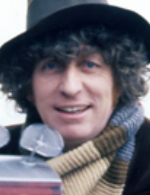 In 2006, the Fourth Doctor made a cameo appearance as a recording in The Kingmaker, a Fifth Doctor audio. However, he was voiced by impressionist Jon Culshaw instead of the genuine article.

In 2011, a good five years later, someone somehow finally convinced Tom Baker to join the cast of Big Finish. Baker says that it was Elisabeth Sladen and Louise Jameson who eventually wore him down. Tragically, Sladen passed away before a planned series of Four and Sarah Jane stories could be recorded. The Fourth Doctor is by far the loopiest of all regenerations, and freely uses Obfuscating Stupidity and Obfuscating Insanity to make himself seem even more out-there than he already is. Big Finish likes to show off his skills as The Chessmaster as well.

"It's the end. But the moment has been prepared for."