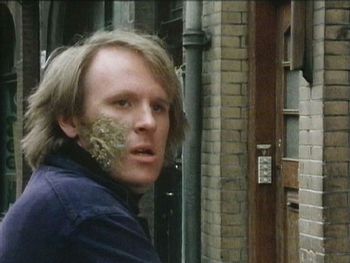 Uh, Peter, you, uh... (starts scratching cheek) You got some... Some, uh... Right there...
"You know how it is. You put things off for a day and before you know it it's a hundred years later."
— The Doctor
Advertisement:

The one where Colin Baker shows up early.

Travelling alone together (with none of that, thank you), the Doctor and Nyssa are interrupted in their travels by a random alien force that tries to take over the body of the Doctor. The Doctor is perturbed, sure, but the Time Lords are completely freaked out by this. Worried that it might happen again, which would be bad news as the alien is made of anti-matter, the Time Lords decide to drag the Doctor back to Gallifrey and kill him... and blame him for Romana leaving, which was no fault of his - she's just as stubborn as he is. With a token show of regret, Lord President Borusa gets Colin Baker to shoot the Doctor and haul him off to the Disintegration Chamber. But someone has conveniently rigged the circuit so that he ends up just being shoved into the Matrix (no, not that one) where the anti-matter alien torments the Doctor... and eventually turns out to be the long-lost (and allegedly dead) Time Lord Omega.

Meanwhile, in Amsterdam, a pair of English teenagers are menaced by a humanoid chicken with a label-gun. ...stop laughing! One of them is brainwashed, and he happens to be Tegan's favourite cousin, and Tegan happens to have lost her job, and happens to be visiting her cousin on this exact day. Then they all happen to be abducted by Omega, who wasn't actually aware that Tegan knows the Doctor at all.

Omega sends the Doctor back to Gallifrey and starts making a copy of the Doctor's body for himself. So the Doctor, Nyssa and the TARDIS run down to Amsterdam, to try and stop him, but they're too late. Omega sheds his massive helmet to reveal... the Doctor! In a most surreal scene, the Doctor and Omega-in-the-Doctor's-body banter back and forth before the Doctor reveals the big problem with Omega's plan: the body is only temporary.

Omega then leads the Doctor on a merry chase throughout Amsterdam, though he does take time out of his busy schedule to watch a Dutch street organ and test out his Villainous Creepy Smile on a little kid. The Doctor and Nyssa try to track him down, Peter Davison tries to speak Dutch and gets three out of three words wrong, and they freak out a lot of people around the Amsterdam grachten. Alas, Omega's antimatter body is dissolving, shown to truly gross effect by its face and hands dissolving into paste and green Rice Krispies. Eventually, Omega degrades to the point that he's a completely different actor, and the Doctor calmly (if reluctantly) takes out that label-gun and shoots Omega. Omega then fades to dust, and everything is back to normal.

...oh, and Tegan joins them again. The Doctor tries to put on a happy face, but it looks like he'd rather have Adric back.

This serial is notable in three ways. The first is that this features the return of Omega, who last appeared in the 10th anniversary special just over a decade prior. The second is that this serial kicks off the 20th anniversary season of Doctor Who, which commemorated the Milestone Celebration by consisting entirely of sequel episodes. The final? Sixth Doctor Colin Baker shows up for the first time — not as the Doctor, but as Jerkass security chief Maxil, the only Doctor until Peter Capaldi to appear in the series before landing the big role. In fact, there's even a scene of Maxil shooting the Doctor, something that's caused a lot of jokes within the fanbase and cast. Colin Baker himself joked that he'd gotten the part of the Doctor by shooting the incumbent.