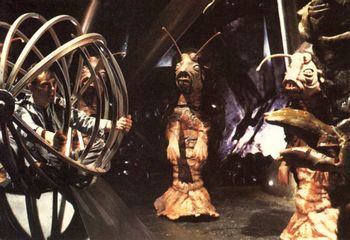 "And this is where we keep our living abstract art exhibit. Don't pet the art- it bites."
Range: Systems that could rebuild a civilization for us. Failure-proof technology.
The Doctor: What happened to it all?
Range: It failed.
Advertisement:

The one where the Doctor gets stuck with a coat rack.

Tegan wants to see something of humanity's future. So when the Doctor takes the TARDIS to Frontios, where sometime in the distant future the last remnants of humanity huddle together under semi-primitive conditions and occasionally get devoured by the ground or squashed by meteor showers, she insists on going out and checking up on them.

The Doctor, as usual choosing quickly to disregard Time Lord rules about not interfering, tries to help out. The locals, also in the usual way, treat the Doctor as a threat rather than a helper, but Turlough saves him by waving a hatstand in a threatening manner. Then it turns out the problem is giant insect aliens that used to attack Turlough's people too, and he has a prolonged fit of scenery chewing. Eventually our heroes, together with the more reasonable Frontios-humans, fight the Tractators by outwitting their only articulate, thinking member, the Gravis. So that's all right. And they'll all get a nice break next, promise.