Even Nerds Have Standards 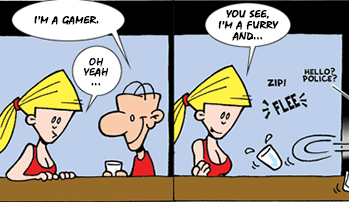 Nerds mock furries. Furries mock otherkin.
"OK, now you've crossed over into the realm of supernerds, whereby even regular nerds steal your lunch money and throw rocks at you."
— Ethan, Ctrl+Alt+Del — "A game of nerds"

This is the notion that Nerd interests can be tiered, and that what's on the lower tiers can make other nerds glad they aren't that nerdy.

Sometimes expressed in the form of "You're the kind of nerd that other nerds would beat up and steal your lunch money". Often when Nerds Love Tough Schoolwork, the regular nerds will mock those nerds. This can also stem from the idea that Nerds Are Virgins doesn't apply to moderate or light nerds. The more nerdy you are, the more You Need to Get Laid.

In Real Life, this can lead to Broken Bases accusing the other side of being more nerdy, but we don't need to note that here. Besides, articulation of such arguments tends to be nerdier than either side.

A Sub-Trope of Everyone Has Standards. Compare with Acceptable Hobby Targets, Boomerang Bigot, Stop Being Stereotypical.

Owen is a gassy Big Fun who thinks positively of everyone he meets. Leonard's delusional LARPing manages to be too weird for him.

Owen is a gassy Big Fun who thinks positively of everyone he meets. Leonard's delusional LARPing manages to be too weird for him.