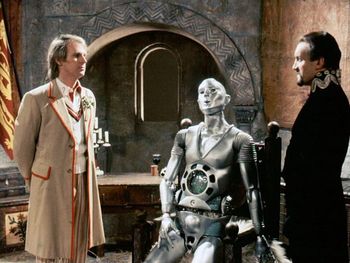 Neither the Doctor or the Master seem willing to bother with Kamelion. Maybe they know about his curse?note Everyone closely involved with the construction and portrayal of Kamelion has met a sudden end.
The Master: Oh my dear Doctor, you have been naive.
The Doctor: Not at all. You may disguise your features, but you can never disguise your intent.
Advertisement:

The one with the cursed prop.

The second of the Fifth Doctor's two-part adventures, this adventure was also penned by Terence Dudley — author of "Four to Doomsday" and "Black Orchid".

Our story opens up in 1215 AD on Earth, where King John is being an incredible dick to everyone around him, including his host Sir Ranulf Fitzwilliam. Such a dick, in fact, that Sir Ranulf's son, Hugh, takes a duelling challenge to defend his father's honour from the King. He must fight the King's French champion: Sir Gilles Estram. As the pair start their jousting match, the TARDIS randomly lands on the field and interrupts everything. Thinking this might be some sort of trick from the Black Guardian (villain of the three previous serials), the Doctor and companions waltz right out into the open, and scare the crap out of the locals.

...except King John, who proudly proclaims the Doctor, Tegan and Turlough to be his demons and happily invites them to enjoy the food and entertainment at Sir Ranulf's castle.

The Doctor accepts — explaining to Tegan and Turlough that this is only a day before the King, in London, took a vow to join in the Crusades — and that he can't possibly be in two places at once. As the day goes on, Turlough is randomly thrown into the dungeon and the Doctor suspects that the King is not who he claims to be. This results in a swordfight with the king's champion. Through a lengthy fight, the Doctor disarms his opponent — who then immediately whips out a tissue-compression eliminator. That's right! For all three of you, the Doctor included, who didn't work out the plainly obviously anagram — Sir Gilles Estram is really the Master!

Let's be fair, though: they really didn't entirely try to hide this fact. The anagram under which Anthony Ainley went was a good one — as was the anagram of the character's name. However, this is all given away by the fact that you can plainly hear Anthony Ainley's distinct voice about halfway into the first episode as he speaks his lines. Great try, though — there's bits of rubber hiding his face and he's covered by a bushy ginger beard, and they didn't even need to disguise him as a random Alien-Asian mystic or a really elderly man this time around!

Anyway, the Doctor and Master have a quick stare-down before the Master is quickly dragged into an iron maiden by King John's men, kicking and screaming. The Doctor hesitates about this, having to make a choice between condemning the Master or an innocent messenger sent from London by the real king, before letting the Master get thrown inside. Of course, this iron maiden instantly turns out to be the Master's TARDIS. Why the Doctor never figured out this out, we will never know. As the Doctor stares at the now-empty space dumbfounded, the Master goes down to the dungeon and frees the previously-imprisoned lady of the castle — now earning trust with the locals while proclaiming the Doctor to be an evil demon.

Meanwhile, Fake King John knights the Doctor as his champion — and the Doctor's first action is to send Tegan back to the TARDIS. His second action is to go down to the dungeon, where he finds Turlough (who's spending the day snarking at the script and lampshading its issues)... but no Master. For slightly obscure reasons, the Doctor shoves the Master's tissue compression eliminator into the Master's TARDIS.

Bumbling around the castle, the Doctor hears not-King-John singing and wanders in to find... a robot! A really, really crappy-looking robot! It's trying to hold an instrument and "sing" along to the "music" that it creates. This, as the Master conveniently pops in to tell us, is Kamelion. Found after the Master's last encounter with the Doctor, Kamelion can turn into anything with a human shape, powered by psychic energy from its controllers. The Doctor and the Master have a bit of fun turning Kamelion into each other, then remember there's a plot going on outside.

Finally, the Master decides to reveal his master plan. As it turns out, the Master now plans to use Kamelion's weak will and shape-changing to go throughout the universe and undermine reality as we know it. The Master is using 1215 AD as a trial-run to see if he can get the Magna Carta to not longer exist by making King John an even bigger Jerkass than before. (Really, considering how he's been treated by the media these days, would anyone notice?)

In quick succession, everyone else in the story runs in to see the Doctor, Master and Kamelion battling it out by... glaring at one another. Turlough grabs a sword and threatens the Master as the Doctor makes Kamelion turn into Tegan — who is then dragged into the TARDIS. The Master continues glaring at the vanishing TARDIS, then makes his exit as his plan is foiled without the fake king. Who knows where he'll end up, though — the Doctor set the Tissue Compression Eliminator to wreak havoc on his TARDIS's navigation systems.

Inside the TARDIS, Tegan is creeped the hell out when Kamelion shows up in her form. Turlough makes some rather disturbing comments that can be taken either way, and the Doctor threatens to take Tegan home if she won't shut up. Kamelion ignores all of this and says he's going to be a great companion for a good, long time. Tegan says she'll shut up, and the Doctor announces that they're going to go to the Eye of Orion, where a nice, relaxing vacation will be had by all. Seriously. We swear.