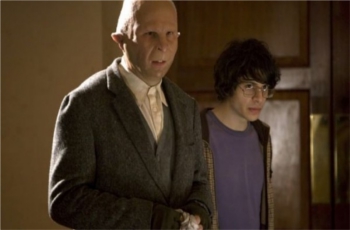 The one with the hotel from Hell.

Interior: the Overlook Hotel. A policewoman, Lucy, cautiously walks along the hotel's red carpet hallways. Seeing a specific door, she turns and opens it. A gorilla steps out from the suite's bathroom and stares back at her. There are other nightmares: shadows, creatures, a clown sitting on a bed with a balloon. Flashes of something go through her head along with the words "praise him". A smile crosses her face, and she closes the door. Taking out a worn notepad, she starts to anxiously write down how she is the last one left, but it doesn't matter now because she will be released soon. Her writing turns automatic, as she becomes stuck on the words "praise him, praise him..."

The TARDIS lands in a hotel hallway. Amy and Rory immediately complain about landing in a hotel, but the Doctor recognizes that it is an alien structure designed meticulously to look like a Earth hotel of the 1980s. They walk down towards the lobby, finding that the windows and doors are bricked up. Suddenly, they are set on by three people ready to attack them: Rita, a medical worker, Howie, a lanky nerd and conspiracy blogger, and Gibbis (quite literally

Promoted Fanboy David Walliams), an alien from a highly cowardly species. After calming the situation down, the Doctor learn they, plus a guy called Joe, are the last of their group.

Rita shows quick analytic thinking and a generally clever mind, and the Doctor instantly picks her as his new companion (and jokingly tells Amy she's fired now). The Doctor offers to take them away with his TARDIS, but she's suddenly gone from where they had left her. Howie explains that the hotel's layout can change in an instant, and escape is impossible.

The three take the TARDIS crew to Joe, a gambler. They have him tied up in the hotel's dining room, where every other chair is occupied by wooden ventriloquist dummies. Joe is stammering "praise him, praise him", which Rita notes is what happened to all the others. She also explains that there is a creature which roams the hallways, attacking and killing those who have been "taken" like Joe. The Doctor insists on exploring the hotel, and the group joins him, with Joe (his mouth duct-taped shut) wheeled along with the group.

They find numerous pictures of the dead, human and alien alike, mounted on the lobby walls, with captions describing each person's greatest fear. Amy finds the sheets from Lucy's notebook in a hallway, and the Doctor realizes that whatever is killing the guests does so by luring the person to open a specific door to witness their worst fear. At that moment, it is able to occupy the person's mind and turn them into a state like Joe's. He warns everyone to not open a single door unless instructed.

Of course, Howie is drawn to one, where he is shamed by a group of beautiful young women for being a stuttering conspiracy nerd. The Doctor quickly closes it, hoping that it is not too late. Joe starts to utter "praise him", luring the beast near. Rory briefly catches a glimpse of a door labelled as a fire exit, but it disappears when he turns back to look at it. Amy and Gibbis find one with Weeping Angels — possibly meant for Gibbis. The Doctor instructs everyone into specific doors not containing anyone's fears, but Rita, pushing Joe, winds up in her room anyway. It has her father in it, mocking her for average grades. Because Rita is distracted, Joe goes outside, and is killed by the beast.

The group returns Joe's body to the dining room. The Doctor talks with Rita and Gibbis, learning that each were pulled from their worlds and brought here. Rita is from Earth. Gibbis' species finds happiness in meek and nervous slavery, and he can't wait to go back home again and quietly await the next random alien invasion of his planet.

As they determine their next plan, the Doctor becomes aware that Howie has started to say "praise him". The group uses Howie's voice over the intercom to lure the beast into the hotel's beauty parlour and trap him there temporarily. The Doctor talks to the Minotaur-creature and discovers that it wishes to die, and he realizes that the hotel has become a prison for it. Instinct forces it to feed and the hotel provides sustenance for it. Howie manages to escape by appealing to Gibbis' desire to be used and seeks out the beast so it can kill him. It breaks out and does so.

Unfortunately, Amy opens up a door* Room 7 that calls to her. Rita notices, and tells her "You shouldn't've done that." The Doctor happens to open another door (to Room 11) that has called to him, and glumly recognizes what is waiting for him. We never get to see it (although the Cloister Bell is heard ringing), and he puts a "do not disturb" sign on the door.

They bring Howie's body back to the dining room, and place him next to Joe. The Doctor tells them that the monster must feed on fear. Since Rory has no fear left in his life, the monster obviously doesn't want him. The answer, the Doctor tells everyone, is to focus on faith instead of fear. The Doctor chats with Rita, reassuring her that everyone will be fine. She comments that she knows things will be fine — after all, this is obviously Jahannam; Muslim Hell. She's lived a good life, so she knows that Allah will judge her fairly and she can deal with whatever she encounters. The fact that she's now stuck in a shifting hotel with a couple of aliens is filed under "freak out about later".

After everyone's regrouped, the Doctor promises Rita he'll get her out and show her the stars. Rita asks the Doctor why he feels the need to be responsible for everyone, commenting that he has quite the God complex. The Doctor seems to take this to heart, but is distracted when he notices a CCTV camera nearby. He rushes off to find the room where all of the cameras lead, while Rita remains, staring into the camera wistfully. "Praise him," she says.

When the Doctor finds the security booth he begins scouring the screens for signs of the Minotaur, he sees only Rita walking further into the hotel. The Doctor calls a nearby room, begging her to let him find her and save her. She refuses, telling him that the hotel's shifting rooms would keep them miles apart. As the Minotaur approaches, the Doctor's pleas for Rita to save herself go unanswered. Rita hangs up and begs the Doctor to look away while she dies, in order to give her some final dignity. The Doctor sonics the screen off as Rita bravely, and happily, faces her death.

The Doctor goes into a violent rage for a few moments while the others look away.

Everyone returns to the hotel's bar. The Doctor comes to realise that the beast is not feeding on fear at all; it's the strong faith of each of its victims. Joe, the gambler, was savvy to luck; Howie was a conspiracy theorist that stuck to his convictions, Rita was a devoted Muslim, and Gibbis, who hasn't been affected yet, relies completely on his planet's many conquerors. Rory just has no real single point of great faith, and the building has been showing him exits because it has no use for him. The Doctor suffers a Heroic BSoD when he realises that he's been encouraging the gang to focus on their faith, and that he's caused their deaths. He's interrupted when he hears that Amy is now saying "praise him". Her faith in the Doctor is what brought them to the hotel in the first place, and what is feeding the beast right now.

The four race to the door that Amy opened previously, followed by the beast. Inside is young Amelia Pond, waiting in her coat with her suitcase to join her Raggedy Doctor on the night she met him. As Rory and Gibbis try to hold the beast back, the Doctor, speaking to both Amys, tells her he can't save her. He took her along because he was vain and lonely. He ruins lives and lies to everyone. He invites people along for a ride, knowing that his life is full of war, death and loss. Because he's not a God, and not a Devil — just "a mad man with a box". It's time for her, "Amy Williams", to just go home. Amy's faith is broken, and the beast lets out a savage roar, falling to the floor. The Doctor races outside, finding it dying.

As they watch, the hotel starts to dissolve around them, revealing it to be a digital simulation within a large ship. The Doctor talks to the beast, a relative of the Nimon, in its own language. The beast tells him that for such an ancient creature, who caused so much destruction and has the blood of the innocent on his conscience, death would be a mercy. The Doctor agrees. The beast curtly tells him that it wasn't talking about itself; it meant the Doctor.

After the beast passes away, the Doctor recognises the place as an automated prison ship, plucking people with strong faith out of time and space as food for the beast. It glitched, causing the fears of past occupants to still be shown. Nearby sits the TARDIS, and as they climb aboard, Gibbis asks for a lift back to his home planet.

Some time later, the TARDIS arrives in London, outside a townhouse. The Doctor presents the house, and a new car, to Amy and Rory as a gift, but Amy suspects that something is up. As Rory checks out the house, the Doctor tells Amy that they must stop travelling with him, as only death and destruction come to those that accompany them. The Doctor makes for a quick goodbye and disappears back into his TARDIS before Amy can protest.