Film / In the Loop 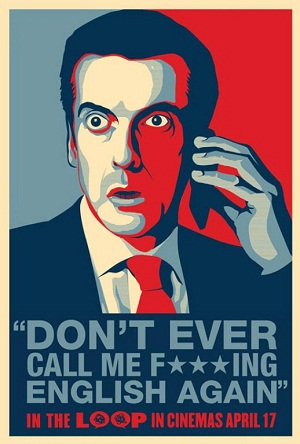 "This is the trouble with civilians wanting to go to war. Once you've been there, you never want to go again unless you absolutely have to. It's like France."
— General Miller
Advertisement:

2009 film spin-off of Armando Iannucci's political sitcom The Thick of It.

The film is set in a slightly different universe from the series, this time with the action unfolding across the United Kingdom and United States. It features most of the original cast, with most of them playing new (but strangely familiar) roles.

Tom Hollander joins the cast as Simon Foster, the hapless Minister for International Development. Peter Capaldi returns as Malcolm Tucker, the Prime Minister's Director of Communications, who is called upon to stop Foster from giving any statements to the press... or to the Americans... or talking in general. Foster is also joined by his senior aide, Judy Molloy (Gina McKee), and millstone — er, junior aide Toby Wright (Chris Addison).

When Foster makes two contradictory statements regarding a possible war in an unspecified Middle Eastern country, he finds himself summoned to a fact-finding mission in Washington, where he is used to push arguments both for and against the war. The Brits comes face-to-face with their US counterparts, including the hawkish Linton Barwick (David Rasche) and the dovish General Miller (James Gandolfini).

As the movie is a spin-off set in almost the same universe as the series, the two share many tropes. Tropes that originated in the TV series may be better placed on the page for The Thick of It.