Film / In the Bleak Midwinter 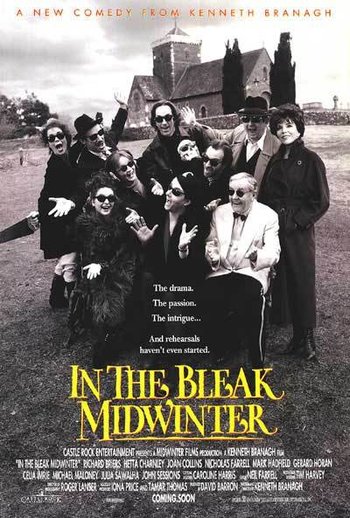 "I'd always wanted to live my life in an old movie, sort of a fairytale, you know. Mind you, I suppose if you think that most fairytales turn out to be nightmares and a lot of old movies are crap, then that's what I did."
Advertisement:

In the Bleak Midwinter (released in the United States as A Midwinter's Tale) is a 1995 black-and-white film written and directed by Kenneth Branagh. Having just finished directing and starring in his epic adaptation of Mary Shelley's Frankenstein the previous year, and preparing to direct and star in his even more epic adaptation of William Shakespeare's Hamlet the following year, Branagh decided to spend the time he had in between directing but not starring in a not-so-epic original story of his own writing, and this is that little picture.

It centers on an out-of-work actor named Joe Harper (Michael Maloney), who is having a crisis and so decides to stage a Christmastime production of Hamlet directed by and starring himself, to raise money for a church in his hometown that is being threatened by developers. He gathers a gang of loony cast- and crew-mates and Hilarity Ensues.