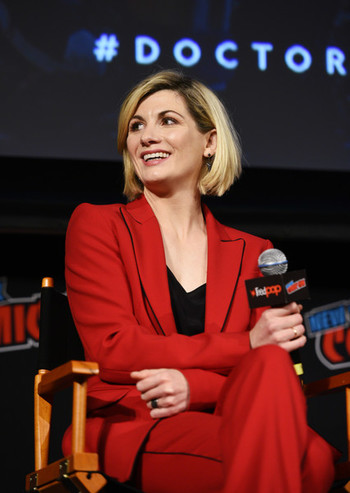 Who said Thirteen was an unlucky number?
"I’m beyond excited to begin this epic journey – with Chris [Chibnall] and with every Whovian on this planet. It’s more than an honour to play the Doctor. It means remembering everyone I used to be, while stepping forward to embrace everything the Doctor stands for: hope. I can’t wait."
—Jodie Whittaker, just after the announcement that she was cast as the Doctor in Doctor Who
Advertisement:

Jodie Auckland Whittaker (born 17 June 1982 in Skelmanthorpe, England) is an English actress from Yorkshire note she's often had to tone down her thick regional accent in her acting roles known for work in movies such as Venus, St Trinians, Good and Attack the Block, as well as the series Tess of the D'Urbervilles, Wired, Return to Cranford, Marchlands, Black Mirror, Broadchurch and The Assets.

On July 16th, 2017 she was announced as the Thirteenth Doctor in famous British science-fiction series Doctor Who, succeeding Peter Capaldi, making her the first woman to officially take the role after fifty four years.note Joanna Lumley briefly played the role in the Comic Relief special "The Curse of Fatal Death", and was actually considered for the real show at one point just like all the other actors who play the Doctor in it, but it's a non-canon Affectionate Parody. Meanwhile, Big Finish Doctor Who's "Unbound" series features Arabella Weir as an alternate Third Doctor in the episode "Exile", but it's part of a series of "What If?" stories and thus has no bearing on continuity.

Humorously enough, she costarred in productions with not one but two fellow Doctors before she finally joined their ranks — playing the title character in a 2012 production of Antigone alongside Christopher Eccleston as Creon, and with David Tennant in Broadchurch. note  Broadchurch also included David Bradley who appeared as the the First Doctor in "Twice Upon a Time" and Arthur Darvill who played Eleventh Doctor companion Rory Williams.

Like previous Doctor Matt Smith, she grew up during the hiatus between the classic and modern Who series and so wasn't very familiar with the show, only having seen a few episodes. She got inspired to audition when after Broadchurch ended she asked Chris Chibnall if she could play a villain on the show, and he informed her he was actually looking to cast a female Doctor. Upon reading the scripts she quickly fell in love with the part and especially took to the reams of Techno Babble involved, greatly helping with Thirteen being more of a Gadgeteer Genius than any previous version.

Just barely edges out Sylvester McCoy, by a centimeter, as the shortest actor (5'6"), to play The Doctor. In July 2021 she confirmed that she would be leaving the role in 2022

, and departed the show in "The Power of the Doctor".