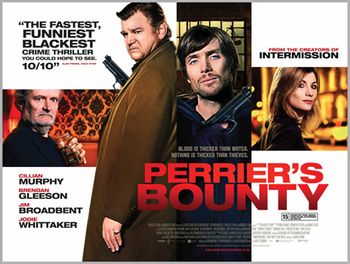 Perrier's Bounty is a 2010 Irish crime thriller comedy in the tradition of I Went Down directed by Ian Fitzgibbon and starring Cillian Murphy, Brendan Gleeson, Jim Broadbent and Jodie Whittaker.

Michael McCrea (Murphy) is a low level Dublin ne'er-do-well and sometime crook who is unable to repay a loan to local crime boss Perrier (Gleeson). After Perrier unleashes his thugs Michael is forced to flee aided only by his neighbour Brenda (Whittaker) and estranged father Jim (Broadbent) - who is convinced that the Grim Reaper himself has forewarned his death.