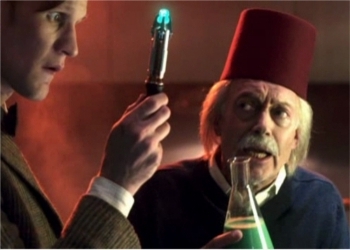 ...trust us, it makes just as much sense in context.
Advertisement:

The one where Einstein is Cthulhu.

The BBC hosted a competition which allowed children across the UK to try their hand at writing for Doctor Who, with the winners to see their creation come to life. Said winners were four students at Oakley Bay Church of England Junior School. The episode witnessed the Doctor in his ongoing quest to just have a fez, Albert Einstein and an Ood.

The Doctor enters the TARDIS control room giddy to finally get his fez back. He places it on a lever, then accidentally trips and pushes the lever, making the fez disappear. After the fez disappears, however, the Doctor's old friend Albert Einstein appears inside the TARDIS wearing an identical fez and holding a beaker of green liquid. Einstein talks about trying to figure out time travel to the Doctor and says that the green liquid may be the key ("No," the Doctor says). As Einstein walks away, the green liquid bubbles onto his face and transforms him into an Ood. Oodstein walks toward the Doctor and repeats the phrase "Death is the only answer," before the Doctor manages to transform him back into Einstein. The Doctor steals his fez and sends Einstein back to his own time.

Alternative Title(s): Doctor Who S 32 E 14 Death Is The Only Answer