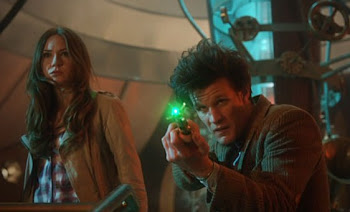 The Eleventh Doctor has a... bad hair day? Someone's flipped the weird switch on this story.
Advertisement:

The one that makes no sense at all.

Written by the Children of Ashdene School.

Behold, another story that was the byproduct of a screenwriting contest aimed at children. In 2012, the Eleventh Doctor and company were stuck in the Land of Fiction and made an appeal on Blue Peter for somebody to write a story for them to get out. That should be your first clue things are about to operate really high on the silly spectrum. "Good as Gold" is more of a "let the writers do as they please" story, after all, being a children's script. This is a Lighter and Softer tale, where the rules don't apply on continuity because it's taking place in a fictitious reality. Anything is possible, even things that don't make sense. Naturally, characters act even goofier than usual. That, and a Weeping Angel is thrown in to mix, with extra powers just for fun.