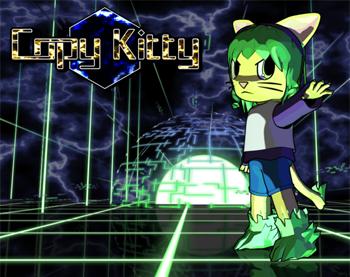 "First rule of life in Zoincailla: there can always be a bigger explosion."
Advertisement:

One day on her birthday, Cat Girl Boki Lamira receives a present from her adopted uncle Savant; a training VR program called "Flux" made for simulating military combat. Boki is one of a select few across the solar system known as an "entanma", people born with unique abilities all their own that can change reality around them with the force of their will. But instead of being an all-powerful entanma like she wanted, Boki finds that she can only copy others' abilities.

Upon activating the program, Savant appears and explains to his niece the program is intended to enhance her power to copy other abilities, with a few modifications of his own creation, of course. Boki doesn't think much of herself, wanting more than anything to have unique superpowers like the entanma she idolizes. Even so, the young kitera will use her considerable skills and knowledge of all things cool to dive into the simulation, jumping, rolling, smashing, and swimming her way through several environments from volcanoes, to forests, desert temples, orbital satellites, and the ocean depths. Throughout her journey, she'll trash several thousand robots in all shapes and sizes, kick hundreds of spherical penguins, battle an ever-escalating number of bosses in both size and weapon variety, and just might learn a thing or two about self-confidence along the way.

Featuring over 175 weapon combinations, 135 short, objective-based missions, a Hard Mode that unlocks after the main campaign with several new weapons, bosses, and changes to existing levels, a second playable character with his own abilities, and a dynamically shifting soundtrack to accompany the player, Copy Kitty is at once both familiar to those who like action games and an experience all its own.

The game was developed for five years before entering Steam Early Access on August 11th, 2016, while the full version (version 3.0.1) was released in April 19, 2018, after seven years of development with the occasional update post-launch. It can be found on the Entanma Project website

A spinoff of sorts, Panel Flux

, features enemies from the game repurposed as falling blocks in homage to Panel de Pon.

open/close all folders
#-C
D-H
I-P
Q-Z
"Please note: any irrational fear of robots that you may have developed while reading this page can be easily solved by destroying more robots."
Feedback

In your fight against the Constructs, sometime a Tuner Hixant will appear, merging a bunch of Mooks (and occasionnaly Bosses as well) to create a powerful Construct to oppose you.

In your fight against the Constructs, sometime a Tuner Hixant will appear, merging a bunch of Mooks (and occasionnaly Bosses as well) to create a powerful Construct to oppose you.