Video Game / The Caverns Of Hammerfest 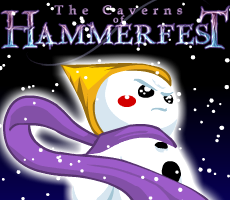 What happened to his carrot nose?
"More than 200 levels!
Loads of enemies!
More than 70 quests!
More than 350 items to collect!
A lof incredible secrets!"
— Disclaimer from the website

Remember the time arcades were actually existent and all of the machines ended making you use up all of your allowance as you played those hardcore games they had to offer?

The Caverns of Hammerfest is a Flash game made by the French game developers of Motion-Twin in February 2006, and is the masterpiece homage to the good old platformers that made you yell Big No-s at the loss of your character's last life. Particularly inspired by gems like Bubble Bobble and Snow Bros, the insane difficulty it has to offer is notable (while also being very fair), but its real charm are the countless collectible items and the nice graphics you come across in your quest.

In it, you're a snowman named Igor brought to life when a sorcerer steals your carrot nose, who also happened to kidnap and enslave all the sentient fruits of the orchards of Hammerfest for no apparent reason. Now, Igor must venture to his subterranean hideout and go through 100+ levels without dying (did we mention there are no save points?) in order to recover his honor and free his fruity friends from the clutches of Tuber the evil sorcerer.

With the ability to throw bombs that freeze your enemies, to progress you have to clear the levels out of the bewitched fruits by sending them to the bottom of the level with them. It's not as easy as it sounds, unfortunately, as you'll see in latter levels. To help you on your way, though, there are the aforementioned 300+ items, most of which have twisted effects of all sorts that go from dandelions that make you flutter to trophies that summon a three-eyed-god to make your enemies dizzy. And these are among the weakest.

. There is a downside, though: you can only play once per day (you can buy more games if you're impatient). This marketing strategy may seem like a problem at the start, when your runs don't go past level 10 and they managed to get you addicted already. However, a skilled player can spend more than 1 hour in a game session and that's usually the time required to go through all the game's levels to the final boss, if not 1 hour and a half, so eventually it stops being so much a bother.

Originally the game only had the 103 levels between the game's start and the final boss, but then the developers introduced the concept of Parallel Dimensions: extra levels that you can access in specific points of the game's main course. They're usually referred as PD + the level in which you can enter the parallel dimension. The Parallel Dimension with the game's hardest levels, for example, is officially named Hell, but is also often called P.D. 54 as one can enter it in the 54th level of the main course.

Note that there aren't even many hammers in the game. It is rather named after the city of Hammerfest

, one of the coldest and nothernmost cities of the world.