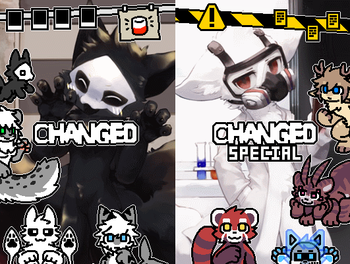 ...Do you want to be transfurred?note Center, left to right: Puro and Dr. K. Counterclockwise from left: A Dark Latex cub, a Snow Leopard, the Squid Dog, the Tiger Shark, a Red Panda, Prototype, the Stiger, and a Deer.
Changed is an Adventure Game developed and produced by Chinese designer DragonSnow, made with RPG Maker VX for Steam. It was released on April 4, 2018.
Advertisement:

You play as Colin, a person who finds himself inside a strange room in a laboratory tower, alone and barely clothed. In order to find answers as to why you ended up there, you have to explore the abandoned building, while avoiding bizarre creatures that attempt to "transfur" you. If captured, he will be assimilated and turned into one of them and potentially lose his sense of self in the process. Can you make it back to the outside world? And will you still be "you" when you get there? And what happened to the world while you were asleep? Also, who is the strange black wolf with a white mask that seems to be aiding you from afar?

An Updated Re-release called Changed Special, including a graphics overhaul, new levels and mechanics and significant changes to the plot, was released in April 2020 to commemorate the game's second anniversary. [[note]]The Steam version is an early access beta and still being updated with new content.

The human can be transfurred into any kind of latex beast, including female ones.

The human can be transfurred into any kind of latex beast, including female ones.