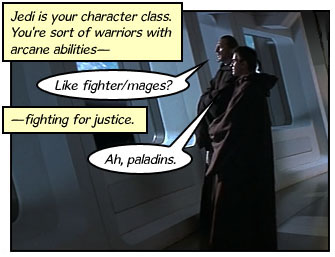 What If? Star Wars as we know it didn't exist, but instead the plot of the movies was being made up on the spot by players of a Tabletop Game?

Well, for one, the results might actually make a lot more sense, from an out-of-story point of view...

is a Campaign Comic created by The Comic Irregulars (David Morgan-Mar and seven of his friends from work), following the footsteps of DM of the Rings, which used a similar premise for The Lord of the Rings. However, while DOTR featured a railroading GM herding a bunch of bored Munchkin players with an iron fist, Darths & Droids has a more tolerant GM, who's willing to let the players get Off the Rails and contribute to the development of the setting, if that's what it takes to have a fun and interesting game. Indeed, the very plot of Star Wars, with all its inconsistencies and bizarre leaps of logic, comes about because the players constantly force the GM to improvise.

And that's not all; the Irregulars seem to be taking perverse pleasure in actually changing things from how they happen in the movies as much as they can while still being constrained by actual screencaps. This ranges from introducing the "Lost Orb" side-quest, all the way to Darth Maul being a hired bounty hunter who's, at worst, a Punch-Clock Villain. Even Palpatine seems like a good guy.

In the blurb for each comic, there are often links to This Very Wiki (one of its creators is a known troper), and there are even comics named after tropes, as well.

The comic is being translated into a variety of languages, including German and French. Notably, some of the translations are pure Gag Dub, including Pirate, poetry, Zero Wing-esque mangled English and tlhIngan Hol (Klingon). Nearly all strips from Episode I are available in German.

Darths and Droids has completed the campaigns based on the six original movies as well as a flashback to a campaign based on Rogue One, then took a side trip into, of all things, the Star Wars episode of The Muppet Show, before starting on the sequel trilogy.

The first campaign, The Phantasmal Malevolence, got a licensed stage adaptation, which you can view here

. A filmed adaptation of the stage adaptation is available to watch here

The players from the original 3 movies correspond to the five basic RPG Player Archetypes, although Morgan-Mar claims it was unintentional.
Characters
All tropes related to a specific character can be found on the character sheet.

And, of course, all Star Wars tropes apply whenever they spring up in the collaboratively developed story.

Mesa genius, and that gives mesa +5.