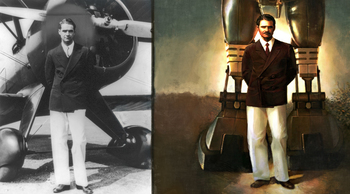 A No Historical Figures Were Harmed version of the famous multitalented eccentric 20th century tycoon Howard Hughes. Hughes was a complicated man whose public persona changed drastically throughout his lifetime, and characters inspired by him can take a variety of approaches depending on what aspects of his life and career they emphasize.

Howard Hughes Homages are always rich, whether or not they start out that way, and always legitimately talented in at least one area, although they can be exceedingly quirky, in ways that can range from a love of Awesome, but Impractical projects to actual mental health problems. Howard Hughes Homages are Non-Idle Rich - they can be self-made men or build on inherited wealth, but they always played an active role in making their fortunes, and the higher-functioning examples have a lot of business and non-business interests. Technological fields are a favorite, particularly military technology and aircraft, and Howard Hughes Homages often play an active role in designing their products, as well as on the business side. Common personal interests for Howard Hughes Homages include aviation, engineering, and filmmaking - all activities Hughes himself participated in. Their antics may land them Hauled Before a Senate Subcommittee, as Hughes was during an inquiry into the Troubled Production of the H-4 Hercules.

Howard Hughes Homages based on Hughes' more outgoing younger years are often dashing playboys with very active love lives. Characters based on Hughes in his old age are more reclusive and often share Hughes's mental illnesses, such as agoraphobia, germophobia, or OCD, and may display some of his odd habits like wearing tissue boxes on their feet or not cutting their fingernails. Many Howard Hughes Homages have dapper mustaches, although Hughes himself was clean-shaven as a young man.

Because of their inspiration's early-to-mid 20th century heyday and interest in technological innovation, Howard Hughes Homages are well-suited to Diesel Punk works and settings, but aren't restricted to them.

Sister Trope to Eccentric Millionaire, Rich Genius, and The Wonka, and often overlaps with Byronic Hero or Broken Ace. See also Mr. Alt Disney, another trope inspired by a real-world 20th century tycoon, which has some features in common. In fact, characters inspired by both Hughes and Disney are not rare.