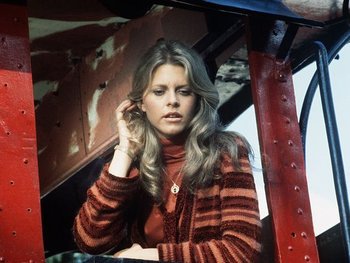 The Bionic Woman (ABC, 1976-1978) is a Spin-Off of The Six Million Dollar Man. Lindsay Wagner stars as Jaime Sommers, the other active bionic agent of the OSI.

Jaime is an Ascended Extra from a '75 episode of Six Mill. Steve Austin (Lee Majors) returns to his hometown of Ojai, California, to buy a ranch. Completely unaware that he is a cyborg, Steve's parents do what any parents would do with their confirmed bachelor astronaut son: they try and hook him up with his old flame, tennis pro Jaime Sommers. But tragedy strikes when, while skydiving with Steve, Jaime's parachute fails and she is fatally injured. An overwrought Steve convinces his boss Oscar (Richard Anderson) to authorize bionic replacement surgery to restore Jaime's destroyed legs, right arm and ear. Steve and Jaime rekindle their relationship, but her body starts rejecting the bionics, and after a Bride of Frankenstein freak-out, she flat-lines.

...until the Nielsen ratings come in. What Steve didn't know is that over the summer hiatus of re-runs, Jaime didn't die on the operating table, but was saved at the last second by "cryogenic therapy," but at a price: no memory of Steve. Viewer response to Jaime was so positive that ABC ordered the producers of Six Mill to revamp the third season opener to make room for a two-parter retconning Jaime death. On very short notice, the network commissioned a spin-off for January 1976.

Since her bionics gave her an unfair advantage on the court, Jaime left the tennis circuit to teach problem children at Ventura Air Force Base, near her hometown of Ojai. In-between clapping erasers together, she is occasionally — and reluctantly — deployed on various OSI missions. Jaime boooiiiiiiings from one assignment to the next: a briefing from Oscar, a bit of espionage, some humorous "pocket bionics" (showrunner Kenneth Johnson's term for the bionics being used in a domestic context), and the big action conclusion. One of the keys to the show's success (it often beat its parent program) was Wagner's wry, 'girl next-door' performance as Jaime. One got the feeling that (unlike Austin) she could lose all her augmentations and not care much. Her adventures are down-to-earth and less violent than Steve's. Consequently, the show is lampooned less-frequently than Six Mill. That didn't stop it from occasionally tilting into fantasy: the "Fembots" in Austin Powers are a spoof of the lifelike androids on this show. One of the crossovers with Six Mill featured a run-in with Bigfoot.

During the final season, an attempt was made to shake things up things by saddling Jaime with a "Bionic Dog" named Max, a German shepherd who was one of the early successes of bionic program. He is scheduled to be put down, on suspicion of having an age-related variant of bionic rejection, before Jaime intervenes; she discovers that his erratic behavior is actually pyrophobia, a result of nearly dying in a lab fire when he was younger.

Like Six Mill, the special effects are a product of their time, mainly because the stunts looked silly at full-speed; so sayeth Lee Majors on the 2010 DVD release of his series. The slo-mo effect was inspired, according to producer Harve Bennett, by the iconic instant replays of NFL Films. The second season would see a slight drop in the ratings...and a cancellation order. The drowning series was picked up by NBC in '77. Lower ratings equaled a smaller budget. NBC didn't exactly push back when Wagner, who appears in nearly every scene, decided she wanted out. NBC was in such dire straits that it must have seemed like a godsend when Wagner gave them excuse to yank it. Bionic Woman ended its third and final season as the 14th-most watched show in the country.

A trio of reunion movies with Six Mill were aired between 1987-94. The second introduced a next-gen bionic woman played by a pre-fame Sandra Bullock as a backdoor pilot for a revival which never got made. There were rumors of new movie or TV series based on Bionic Woman, including a cable series which would have starred Jennifer Aniston, and a re-imagining in which the title was simply a metaphor and the lead character had no powers at all.

A short-lived remake aired on NBC in 2007, which was closer in spirit to Martin Caidin's novel series (Cyborg) upon which Six Mill was based. In 2012, a comic book version (featuring a Jaime who is not averse to breaking necks when threatened) was launched, but it was replaced in the summer of '14 with Bionic Woman Season 4, which more resembles the old TV show. In 2017, another comic book teamed Jaime up with the Lynda Carter version of Wonder Woman.

The Bionic Woman provides examples of the following tropes: