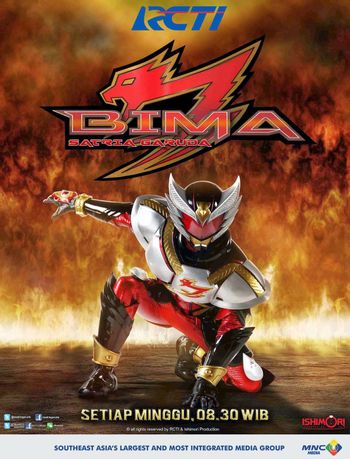 Bima Satria Garuda (Bima the Garuda Knight) is a tokusatsu series from Indonesia. It is the result of a cooperation of MNC Media with Ishimori Productions, the creator of Kamen Rider. Starring Christian Loho, Rayhan Febrian, Stella Cornelia (of JKT48), Adhitya Alkatiri, and Sutan Simatupang. Bima Satria Garuda began airing on RCTI on June 30, 2013.
Advertisement:

The story begins in the Parallel World controlled by VUDO. The Parallel World is a world that lives in perpetual darkness, where nature does not have a light source like the sun, water, oxygen, and other elements necessary for life. Rasputin (Sutan Simatupang) is the evil and cruel ruler of the villainous organization VUDO. He wants to take over the Earth to seize their natural resources for the sake of all life in the Parallel World. A scientist on Earth managed to create a portal that connects the Earth and other galaxies. VUDO saw this opportunity and wants to get to Earth.

Ray Bramasakti (Christian Loho), gets a red Power Stone from a mysterious man, Mikhail (Adhitya Alkatiri), to stop any attempt by Rasputin to take over the Earth. By getting the red Power Stone, Ray got the power to change into Bima Satria Garuda. Randy Iskandar (Rayhan Febrian) and his sister, Rena (Stella Cornelia) who are Ray's adoptive family become involved in the actions of BIMA against evil Rasputin's schemes.

The hero and his allies: