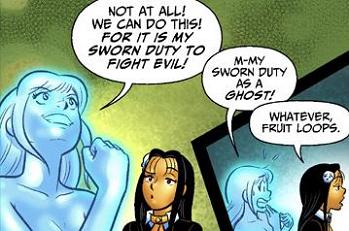 "And then, after I overthrow this fool—Oh, hello! I didn't know you were there!"
— Dread Lord, Warcraft III
Advertisement:

When a character is busy "thinking out loud", only to suddenly discover that someone else has has overheard details that should've remained secret, what do they do?

Come up with an impromptu explanation on the spot, and hope the other character is fooled. Did the Big Bad just gloat about how he's going to Take Over the World? No, that was just a chapter for that novella he's been writing on the side. Er... right?

Villains seem particularly prone to this (due to their penchant for Evil Gloating), especially if the Big Bad and his Dragon (or another Big Bad) don't get along well and one of them is secretly plotting to betray the other; but it can really occur with any character who is a little too overconfident. For example, a Hero in the midst of a Badass Boast may accidentally reveal too much about their particular powers, giving their opponent information on how to defeat them.

But in most cases, their impromptu explanation is enough to drop the matter ... for now.

Related to the Verbal Backspace, which is generally used to cover up verbal errors of the more mundane (rather than plot relevant) sort.

See also Bad Liar and Implausible Deniability; compare and contrast Digging Yourself Deeper, Right Behind Me and That Came Out Wrong. See "We're Live" Realization for one cause.