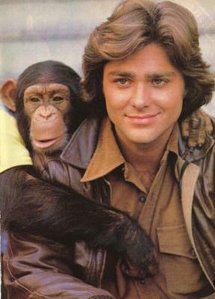 B.J. and the Bear was a comedic Action Series created by Glen A. Larson that aired from 1979 to 1981 on NBC, about a professional itinerant truck driver with his pet chimpanzee, Bear.

Greg Evigan starred in the role of Billie Joe (B.J.) McCay, and drive a red and white 1977 Kenworth K-100 cab-over-semitrailer truck. Although no home base was ever specifically specified, he was presumably based in Orly County, Georgia, as – at least during the first season – there were many crossover episodes with a sister series, The Misadventures of Sheriff Lobo, starring Claude Akins as a corrupt sheriff who wanted to put B.J. out of business.

Bear (as it was explained in many episodes) was named for Paul "Bear" Bryant, head football coach at the University of Alabama from 1958–82. Bear's houndstooth cap was inspired by Bryant's choice of headwear.

A mid-season replacement on NBC during the 1978–79 season, B.J. and the Bear was a modest success during one of the network's darkest eras, and was renewed for the 1979–80 season. Plots during this era generally involved B.J. meeting a beautiful young lady, who was in some way affected by (or involved with) criminal activity, and B.J. eventually gathering enough evidence to defeat the bad guys. Other episodes involved Lobo's latest scheme to run B.J. out of business, but failing.

After a hiatus, the series returned in January 1981. Here, B.J. decides to settle down and take over a friend's trucking company in California, renaming it Bear Enterprises. While Bear still figured heavily into the plots, seven beautiful young women – whom B.J. had hired to help run his company – take the spotlight. The reason is because of one Rutherford T. Grant, the corrupt head of the Special Crimes Action Team and a silent partner in a competing trucking firm. Plots revolved around Grant's latest schemes and B.J.'s efforts to defeat him.