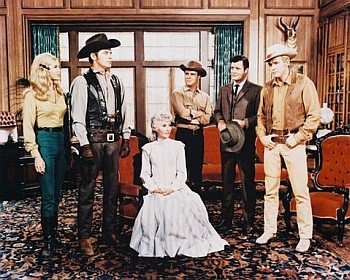 Western TV series which ran on ABC from 1965 to 1969, starring Richard Long, Peter Breck, Linda Evans, Lee Majors (in his first starring role) and Barbara Stanwyck. The series featured the Barkleys, a wealthy ranch family living near Stockton in California's Central Valley. The family consisted of Victoria, a tough pioneer turned elegant lady; her four sons, and a daughter. It was more socially conscious than other Westerns of the time, featuring some diversity (black cowboys, Chinese railroad workers) and plenty of angst, often arising from various family members' attempts to fight injustice.