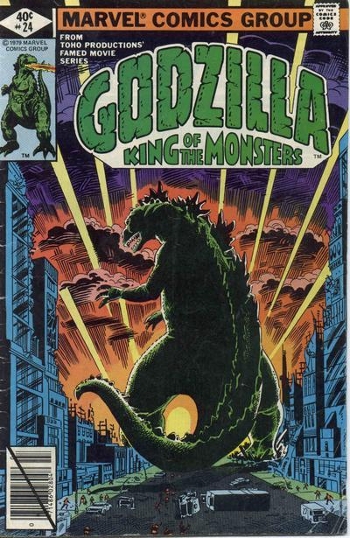 A comic book set around Godzilla, following him after he surfaces in USA and rampages through the Marvel Universe for twenty-four issues (August 1977- July 1979). After the later Showa films of The '70s made Godzilla into more of a heroic character, Marvel's comic run portrayed him as an animal Anti-Hero who's just too danged big for the era he lives in. He smashes lots of stuff but also ends up saving humanity from other monsters. He's been described as a giant lizard version of The Incredible Hulk.

As is generally the case with licensed properties that are set in the Marvel Universe proper, Marvel still owns the villains and supporting cast-members they invented for this comic, and they still show up from time to time in other Marvel books — mainly the giant robot Red Ronin and the mad scientist Doctor Demonicus.