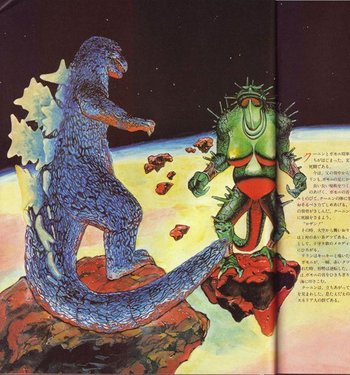 is an illustrated Godzilla short story.

Originally a scrapped Godzilla film, it was instead published in the Japanese Starlog magazine in 1979 with Toho's permission and would gain infamy being likely the strangest thing that the King of the Monsters has ever officially been in.

Godzilla washes ashore in Kujikiri Beach, dying of diabetes. While dissecting the kaiju, scientists discover that Godzilla is actually a pregnant female space alien named Rozan from Planet Godzilla who must return home. Scientists transform Rozan's body into a rocket ship and launch her and her unborn baby on a journey across the stars to return home where her husband and a strange, deadly foe await. It only gets stranger from there.

If it helps to make sense of this whole thing, the story's movie-style bylines indicate the proposed film was to be directed by Nobuhiko Obayashi. Yeah. Chew on that for a while.

Not to be confused with the later film Godzilla vs. SpaceGodzilla.

A Space Godzilla includes examples of the following tropes: