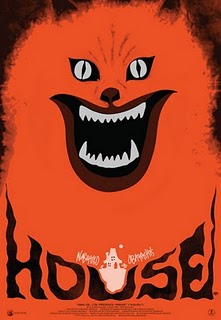 I know he'll come back. Because he promised. He promised he would.
Advertisement:

House (Hausu) is a 1977 Japanese surrealist horror comedy Toku film directed by Nobuhiko Obayashi. It is considered the Spiritual Predecessor to The Evil Dead (1981).

"Gorgeous," an oddly named Japanese teenaged girl, is unpleasantly surprised when her widowed father tells her that he is getting remarried. She decides to get out of town, and invites six of her friends—the also oddly named Melody, Sweet, Fantasy, Kung Fu, Prof, and Mac—to the country to visit the home of her "Auntie". Auntie receives them pleasantly but it quickly becomes apparent that something is very wrong with her. Something is very wrong with her house as well. Strange things begin to happen as it seems that evil forces are at work to Kill 'Em All. It can be best described as a drug-addled David Lynch's version of a more colourful (if that's even possible) Suspiria (1977) remake. The Criterion Collection memorably described the film as both "a psychedelic ghost tale" and "an episode of Scooby-Doo as directed by Mario Bava"

It was released in North America in 2009 as House. Not to be confused with the American haunted house movie called House, or that other House who's a snarky doctor.