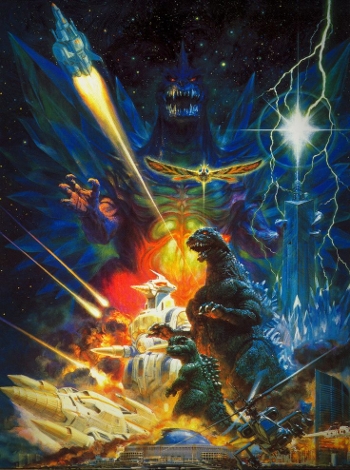 "Humans survive... by doing... what they have to do."
— Yuki, espousing some "wisdom" to Professor Gondo.
Advertisement:

The twenty-first Godzilla film and the sixth in the Heisei series. Toho decided Godzilla’s next foe would be a new creation, SpaceGodzilla. The film starts Godzilla's development as an Antihero and continues the plotline of his adopted son. Titled "Gojira tai SupēsuGojira" in Japan.

Originally, MechaGodzilla was set to return and fight alongside Godzilla, but it was decided three Godzilla-esque kaiju were enough for the movie. So he was replaced by MOGUERA, a redesign of a Mecha from The Mysterians. While the film did well at the box office, the film was viewed somewhat more negatively. The plot was considered lumpy, LittleGodzilla resembled Minya for too many people’s liking, and there were odd editing choices. For instance, Godzilla was originally going to try to free his son from his crystal prison before going after SpaceGodzilla, but that scene was inexplicably cut. SpaceGodzilla himself was well-received, though, and the movie has some fun monster action.

While Miki Saegusa is mulling over whether to join Project T (a plan to control Godzilla telepathically via a probe implant), the Cosmos warn her of SpaceGodzilla’s plan to kill Godzilla and Take Over the World. His crystals have destroyed a NASA space station and an altercation between him and MOGUERA in the asteroid belt results in the damage of the mech. Meanwhile, Miki and the Project T team set up shop on Birth Island, where the sweet-natured LittleGodzilla and his stepfather are currently residing. After a brief rivalry with Akira Yuki, who holds a grudge against Godzilla for killing Gondo, the probe is implanted and Project T is going smoothly. But then SpaceGodzilla appears.

In a one-sided battle, Godzilla is overwhelmed by his adversary and is helpless to stop his son from being imprisoned. Godzilla follows SpaceGodzilla to Fukuoka where he sets up base. Can Godzilla defeat his Evil Twin from space, and would the human heroes align with him to stop this menace?

Followed by Godzilla vs. Destoroyah.