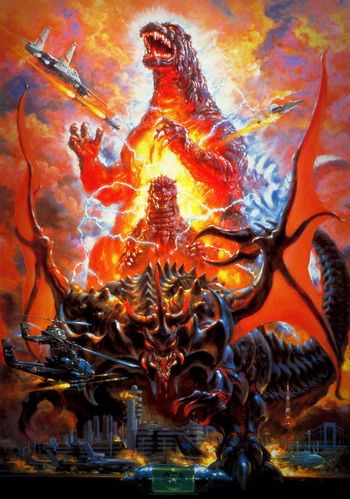 Godzilla vs. Destoroyah is the 1995 sequel to Godzilla vs. SpaceGodzilla, the twenty-second film in the Godzilla series and the final film in the Heisei series. It is directed by Takao Okawara, with Kazuki Omori writing the screenplay.

The film involves Godzilla (Kenpachiro Satsuma) suffering from a nuclear meltdown with 2 scenarios: A. He will blow up, resulting in a nuclear explosion that will destroy the world. Or B. He will meltdown at 1200 degrees to the point he will destroy the world from the inside. New problems arise when fish in aquariums are being reduced to skeletons caused by creatures awakened by the Oxygen Destroyer, the weapon used to kill the first Godzilla in the original Godzilla. Now the world rests on Godzilla and his newly grown son Godzilla Junior (Hurricane Ryu) to take on this new threat, before the nuclear dinosaur dies.