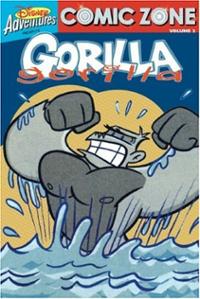 Gorilla Gorilla was a comic by Art Baltazar that ran in Disney Adventures from 2003 to 2007, when the magazine ended. The comic centers around a gorilla named Gorilla who turns into a huge, King Kong-like monster called Gorilla Gorilla whenever evil strikes. His most recurring foe, the giant Lizard Lizard, is secretly his roommate Lizard, who has a Hair-Trigger Temper and turns into Lizard Lizard whenever he gets angry or stressed. Ironically, Lizard is a Gorilla Gorilla Fanboy. Neither are aware of each other's secret identity, though Gorilla is suspicious. The second most prominent villains are the Evil Aliens, and are usually the cause of most non-Lizard Lizard problems.
Advertisement:

Some of the comics can be read on the author's website