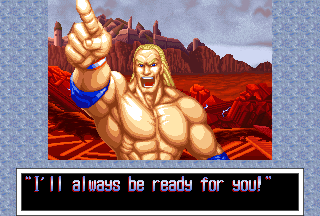 Whatcha gonna do when Muscle Power runs wild on you, brother?
Advertisement:

Hulk Hogan was one of the few men who crossed over from Professional Wrestling to movies and animation in the U.S., and was also the poster boy of the American Wrestling Association when it was the territory with the most surface area, the WWF as it was monopolizing the business in the country, and WCW when he had one of professional wrestling's most famous face heel turns when he became the leader of the nWo. Though he was ultimately defeated by Antonio Inoki, Hogan was also the first man to win the IWGP Heavyweight Title Tournament to become the number one contender for Inoki's belt, and became infamous for his chants of "Ichiban" even after his loss in Japan. Since The '80s, he's made a mark on the wrestling industry and on pop culture as a whole, being the subject of many expies, parodies, and homages, especially during The '90s, though this trend continues even today. This trope is about all of the Hogan-like characters who show up in media.

Common traits of these expies include:

Sub-trope of Stock Parodies and No Celebrities Were Harmed. Compare All-American Face.

Even though his stage name is allegedly based on him, he should not be confused with another Hulk. Also, despite having the same surname, shouldn't be confused with Australian actor Paul Hogan, nor the title characters of the Hogan's Heroes or The Hogan Family series.

Say your prayers and read these examples, brother!!