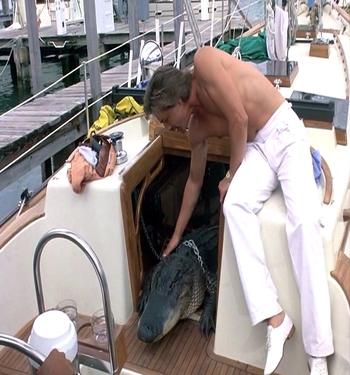 Pet alligator optional
MacGimmick: Lots of famous detectives have lived on boats. Sonny Crockett from Miami Vice, B.L. Stryker, the team from Simon & Simon and even Quincy all lived on boats!
Girl of the Week: True, but none of them ever converted their boat into a treehouse!
— MAD satire
Advertisement:

Straightforward trope — the hero is that much cooler because he not only has a Cool Boat, he actually lives on it (in theory, the hero could live on an uncool houseboat, except that houseboats are almost always inherently cool), making it, at the same time, a Cool House. This may be symbolic of the hero's cool detachment from things (or his being Allergic to Routine), since he could (in theory at least) just raise anchor and move his whole life away whenever he wishes. Doesn't apply to people who live on a boat which serves as the home base for dozens or hundreds of occupants, or to those who just work on a boat owned by someone else, even if that's where they spend their nights (in a navy, as a pirate, on a cruise ship).

In Real Life, houseboats are typically mobile homes on pontoons or barges, and are as close to Cool Boat as The Alleged Car is to Cool Car. Some works with Loser Protagonists will have the hero live on such a houseboat to highlight their lack of social skills.