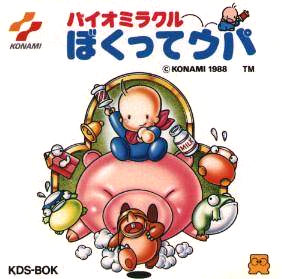 Bio Miracle Bokutte Upa (Bio Miracle - I'm Upa) is a Platform Game made by Konami in 1988 for the Famicom Disk System. It was never physically released in North America, but was available on the Wii's Virtual Console before being delisted following the termination of the Wii Shop Channel.

The story follows Prince Upa, who comes from a long line of brave fighters. One day he accidentally breaks an urn, releasing the evil spirit Zai upon the world. Zai uses his evil magic to steal all the babies in the kingdom, and knocks out all the adults by stealing their dreams. Now, it's up to him to save his kingdom and rescue the babies Zai captured.