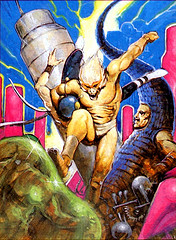 Bio Force Ape is a side-scrolling beat 'em up created by SETA for the NES. Since its cancellation in 1992, it became a famous case of Vaporware.

When a scientist and his kid are kidnapped by a mysterious villain, their pet monkey tries to save them. Unfortunately, the villain kicks the monkey and makes off with the people. The monkey then drinks some kind of super-potion that turns him into a musclebound, ape-faced, pro-wrestling humanoid. He then sets off to rescue his owners from the hordes of animal-costumed thugs and breakdancers.

The game was subject to an elaborate hoax in 2005 when a person named Paul Brown announced to the Digital Press forum that he had found a working prototype. After a Flame War erupted over whether he should dump the ROM or sell it, Paul posted a picture that revealed that he had smashed the cartridge due to all the problems it caused. The hoax started a small meme involving a supposed Blob Monster enemy that was made out of butter.

were notified by Paul Brown himself of a REAL Bio Force Ape prototype being sold on Yahoo! Japan. After buying it, the team dumped the ROM and released it onto the Internet.

More info can be found here.

Not to be confused with Bio-Meat: Nectar.

The hoax provides examples of: