The year is 1993. Wolfenstein 3D is a huge hit, a landmark in the continuing evolution of computer technology. Wolfenstein's creator has been working on a sequel rumored to blow away the original as much as the original blew away previous attempts at 3D games. However, the release date keeps getting pushed back, and users ("gamers" wasn't yet a ubiquitous term back then) were getting anxious. What to do in the meantime?

Enter Blake Stone: Aliens of Gold! JAM Productions used licensed Wolfenstein 3D technology to develop a brand-new game, which was published December 3, 1993 by BBS favorite Apogee Software. Like Wolfenstein, Aliens of Gold featured 6 episodes of 11 levels each (9 normal levels and 2 secret levels). The first episode was available as shareware. The registered version of Aliens of Gold shipped with a comic book, called a "Blake Stone Adventure"; to date it is the only title in the company's product line to include such a bonus.

The game had a few innovations for the genre like being able to talk to people instead of just shoot them, an automap system, one-way doors, slightly greater world interaction in the form of switches to deactivate barriers and using tokens at vending machines to restore health, the ability to revisit earlier levels, etc. It was entertaining for a while, but was only intended to fill the gap until Doom came out — which happened a week later. Oops. Nonetheless, Aliens of Gold got a single-longer-episode sequel, Planet Strike, released on October 28, 1994. Both games are available on Steam, bundled together with Rise of the Triad (the original, not the 2013 remake). 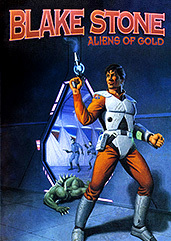 The year is 2140. Robert Wills Stone III — a.k.a. Blake Stone — is an agent of the British Intelligence, recruited after a highly successful career in the British Royal Navy. His first major case is to investigate and eliminate the threat of Dr. Pyrus Goldfire, a brilliant scientist in the field of genetics and biology, known for his outright disrespect of professional ethics. Backed by his own organization, STAR, Dr. Goldfire plans to conquer Earth and enslave humanity using an army of specially trained human conscripts, modified alien species, and a host of genetically-engineered mutants. Agent Stone is sent on a mission to knock out six crucial STAR installations and destroy Goldfire's army before it can assault the Earth.
Planet Strike synopsis 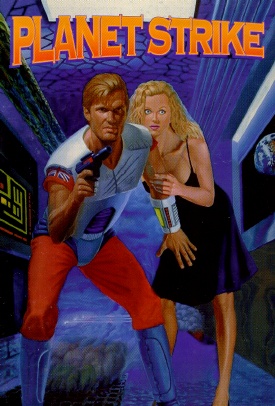 Following Dr. Goldfire's escape at the end of Aliens of Gold, British Intelligence initiates a large-scale search to capture him. For nearly a decade they find no trace of the arch-villain. Finally, in 2149, Goldfire is spotted in an abandoned training facility near the former STAR Institute. He is building an army stronger than anything witnessed before, in a second attempt to enslave humanity. Agent Stone is once again sent to stop the villain, with a direct order to find and terminate Dr. Goldfire so that he can never threaten civilization again.
Advertisement:

Tropes applying to the series in general:

Tropes specific to Aliens of Gold: