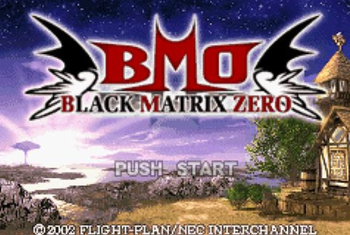 Flight-Plan's first Strategy RPG series. The games, particularly the first one, have a strong Abrahamic motif to them. Unlike Flight-Plan's other SRPG series, the Black/Matrix games do not share the same universe with each other. They do, however, share many common characteristics. In all of them, there are three races of people: the white-winged angels, the black-winged devils, and the wingless humans. The angels and devils hate each other for one reason or another. The humans are relatively weak compared to the winged people and tend to believe the angels are good and that the devils are evil. The truth is usually a bit murkier than that.
Advertisement:

When the first game came out, it was described as X1999 or Angel Sanctuary meets Final Fantasy Tactics. Nowadays, the series can also be described as a Darker and Edgier Disgaea.note The first Disgaea game can be considered an Alternate Company Equivalent. It shares many similarities with the B/M games that predate it. For starters, both series are SRPGs that feature humans, angels, and devils/demons (both akuma in Japanese) with their own generically-named worlds, the same across both. The demons of Disgaea have a Bad is Good and Good is Bad mentality much like the first B/M. The general plot of Disgaea mirrors B/M 2. Both protagonists are family members of their somewhat-dead Maou, are recently awakened/resurrected, working to stabilize Makai in the absence of the Maou, have to contend with humans being manipulated by angels, spend most of the game in Makai with the end part in Tenkai, revolve mostly around a Power Trio dynamic in terms of plot, have a token angel party member, come with multiple endings, and have a new game plus feature. The main differences are general tone and mechanics. Flight-Plan's offering is Darker and Edgier with Anti-Grinding whereas Nippon Ichi's offering is Lighter and Softer with Level Grinding.

Tropes common to the Black/Matrix series